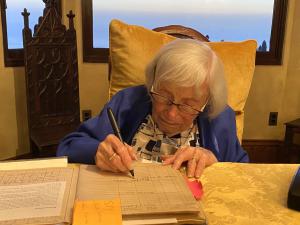 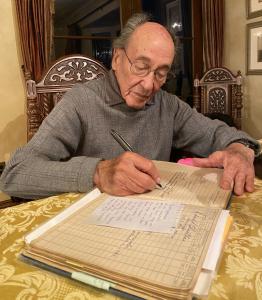 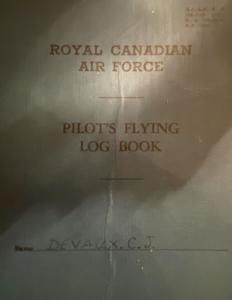 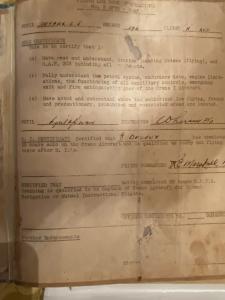 Nick Devaux from St Lucia turned his father Cyril Devaux’s fighter pilot log-book into a truly unique token of remembrance. By inviting WWII veterans and witnesses around the world to sign and share their first hand accounts, the book has become a living memorial. The log book has become a worldwide remembrance and reconciliation initiative.

Over 4 years, 100 signatures, and thousands of miles later, TLBP continues to capture these signatures and testimonies. The effort is aimed at raising awareness of the unspeakable horrific suffering and deprivation experienced by millions – on all sides – during World War II and the need to strive continuously for peace and reconciliation. A secondary but equally important endeavor involves documenting the book’s remarkable journey through the hundreds of hands that have carefully facilitated this unique poignant token, its mission, and all it signifies.

Marthe Cohn lived through WWII joined the French Army during WWII after Hitler’s rise to power. After keeping silent for nearly 60 years, Mrs. Cohn now shares the extraordinary story of how she managed to beat the odds and fight the Nazis as a spy after her family fled to the south of France and a sister was sent to Auschwitz. She used her German accent and blonde hair to pose as a German nurse and slipped behind enemy lines to gather essential information about Nazi movements for Allied commanders. At the age of 101 she still tours the world, lecturing and promoting her message to people of all generations – to stand up for humanity and what you believe in. Her harrowing journey is told in the recent award winning documentary film, “Chichinette: The Accidental Spy”. Marthe’s palpable reverence and joie de vivre shine through, filling the film with hope for the future. Her spy memoir entitled “Behind Enemy Lines” chronicles her courageous work and her remarkable life. She has been awarded countless medals and honors including the Croix de Guerre, 1945 Médaille militaire, 1999 Chevalier de la Légion d’honneur, 2002 Woman of Valor from the Simon Wiesenthal Center, 2002 Medal of the Nation’s Gratitude, 2006 The Cross of the Order of Merit, Germany’s Highest Honor. There currently is no serving French general who has obtained the gold medal from the National Society of Mutual Aid for the Military Medal which was awarded to Mrs. Cohn in 2019.

Behind Enemy Lines: The True Story of a French Jewish Spy in Nazi Germany