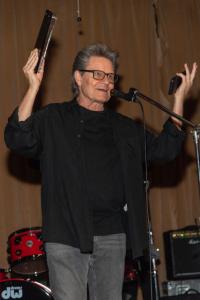 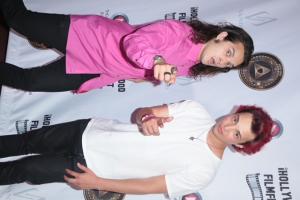 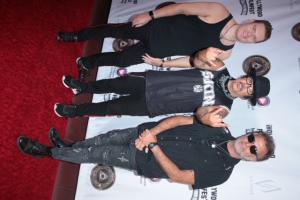 HOLLYWOOD, CA, UNITED STATES, July 9, 2021 /EINPresswire.com/ — Non-fungible tokens (NFTs) set the stage for many 1sts for rock legend meets next-generation, for the inaugural iHollywood Film Fest which began on Friday, June 25 at the historic Woman’s Club of Hollywood in Los Angeles and closed July 6 with the announcement of the audience awards.

Scott Page accepted his Icon award for music and technology. Over the 4th of July weekend, Scott latest company launched selling their first NFT for $1.1 million with artist Ruby Mazur celebrating the 50th anniversary of the iconic Rolling Stones “mouth and tongue”.
David Bianchi accepted his Icon award for innovation in film for “You Can’t Hear Me”. David is the creator of the first ever, award-winning spoken word film to be minted as an NFT. David has had two projects which were won by MetaPurse, the owners of the $69 million Beeple collection.

Noah Weiland and Tye Trujillo led off the evening with “Shark Attack” and a rendition of Stone Temple Pilot’s “Plush” sounding much like his dad, legendary late rocker Scott Weiland. Tye Trujillo’s dad is legendary bass guitarist Robert Trujillo from Metallica.
Derek Day lit up the stage with classic rock and roll music. Derek will be touring and opening up with Classless Act for Mötley Crüe and Def Leppard on 2022 Stadium Tour. Wicked Witch, Tommy Bolan, Sean McNabb, and Star Fields (Mayans, Sons of Anarchy) also came out to support their friends.
The world premiere of “The Original Charvel Gang”, starring legendary musicians Slash and Michael Anthony was held during the festival and screened throughout the evening. Guitarist and filmmaker Paul Gervasi wrote and directed the feature documentary releasing August 10 on Amazon.

“Running with the Devil” was performed as a tribute to Eddie Van Halen. “Charvel wouldn’t have blown up BIG without Eddie Van Halen, that band was also a game changer in 80’s rock scene ruled MTV, the world, etc, therefore I couldn’t have made my film” noted Paul Gervasi, the director and writer of “The Original Charvel Gang”. Pink Floyd’s Scott Page, Chris Grainger (son of Rod Stewart’s Gary Grainger) on drums and Sammy Burke on bass performed with Paul Gervasi for the after party.
Spearheading our NFT team was Alyze Sam with Lord Travis Wright and Meaghan Monroe. Alyze led the minted of the NFTs for iHollywood Film Fest and has been minted herself into the Blockchain Heroes NFT collection as Mz Stability. She has a passion for blockchain social impact projects such as The Watersmark Light to solve homelessness using technology and rebuild Haiti.

Lord Travis Wright created the artwork for the NFT for the iHollywood FilmFest iHollywood21 collection. The NFT included the I AM symbol Godessa trademarked image by Vanda Inc. with digital formatting by Mark Johnson.
Futurist and blockchain and cryptocurrency evangelist Russell Korus, CEO EZ365 introduced filmmakers to NFTs and How They’re Changing the Artist Landscape.

The Sick Bureau presented a digital illustration NFT from the newly released @sickbook. The Sick Dictionary, a wicked fun group of definitions against the commodification of daily life, Coronavirus vocabulary, and terms that address the apocalyptic crisis in health.

The iHollywood Film Fest, International Hollywood Film Festival, focused on content created specifically during the pandemic as well as traditional feature film and mini movie (short films). Due to the pandemic, the festival was hybrid allowing the festival experience to be open to audiences around the world. The festival began June 25 at the Product Hollywood gifting suite with after party and rock concert on June 27 and continuing virtually closing with Audience Awards announcements on July 6, 2021. There were 54 films and panels, networking, industry and celebrity panels and Q&A’s, in-person and virtual interviews and awards. All films were screened virtually.

Moving forward to the second season, the iHollywood Film Fest will continue its focus on being a festival for all creators encouraging diverse voices from around the world continuing to be on the forefront of new technology. A call for entries is currently available through Film Freeway and on the festival website.