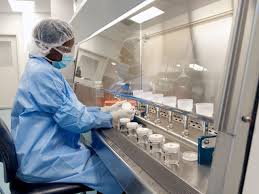 Following its earnings release, the stock was down as much as 2.6 percent in after-hours trading. The company’s fourth-quarter revenue was $7.97 billion, a 7 percent increase over the same period a year ago. Adjusted earnings were $1.03 per share, beating Wall Street’s expectations of $1.01 per share.

Humira’s patent expired this year and AbbVie is fighting suits from competitors to bring a generic version to market. Analysts appear concerned that the sales slowdown might be setting in, and the company noted in its earnings report that Humira is now facing serious competition from biosimilars, which can cost a fraction of the original brand-name drug.

About three-quarters of AbbVie’s profits come from drugs that are generics, and the company’s future growth relies heavily on portfolio diversification. In response, AbbVie is spending $21 billion to acquire commercial and research biotech companies to expand in oncology, autoimmune disease, and HIV/AIDS. The company is announcing another $6 billion in research and development spending in the upcoming fiscal year, or an 11 percent increase over last year.

AbbVie has one of the largest market caps of any American pharmaceutical company at $210 billion, and has long been a dividend-paying stock. Its trailing yield is 3.2 percent, putting the stock in the large-cap S&P 500 index.