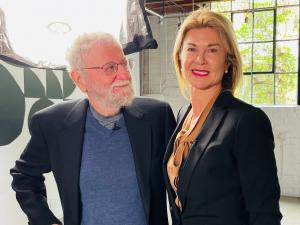 LOS ANGELES, CA, UNITED STATES, June 11, 2021 /EINPresswire.com/ — I arrived in Hollywood continuing to pursue my craft as an actress, I had studied Shakespeare at RADA (Royal Academy of Dramatic Art, London) London, and performed in a number of live stage plays. Live theater training is such a valuable tool for an actress. I studied and worked with various wonderful acting coaches. In Ivana Chubbuck’s Master class, we would be given scenes to work on with scene partners and work and rehearse on the roles and then put them up in front of the class like mini plays. I have worked in Master classes with renowned acting coach and Director, Larry Moss (Leonardo di Caprio’s coach) who emphasizes the importance of voice training. During the pandemic, the roles I booked were pushed back and some even went away, though perfectly understandable.

However, because of Covid I have had some other interesting acting jobs. I booked twice and performed as an interviewer, interviewing established professors for their programs which, prior to Covid would have been live. One was with a professor who lectures on the release of Oxytocin, Professor Paul Zak (https://en.wikipedia.org/wiki/Paul_J._Zak). Zak has done numerous Ted Talks, appeared on Good Morning America, and voiced science dialogue for The Amazing Spiderman. Aother professor was a professor of Design, Don Norman. Norman was on the design team for Apple products for many years and Author of the book “The design of everyday things”. These were both not traditional acting roles but my years of training, as the professor kindly thanked me stated, “You are obviously a great actress. Your years of training has helped you speak with a diction and clarity that was very helpful for me and made the interview enjoyable”.

Both jobs were filmed in Los Angeles. There seems to be a new lease of life here as everything opens back up. One thing Covid showed us is there is a need for more content, and now that California is being freed up and is largely vaccinated, it’s a great place to be creatively. Due to Covid, the program shifted gears from live programs, mostly in Brazil, to hire a production company to film these lectures and Q & A sessions moving forward.

I have my acting profile on a number of sites and somehow this production company found me so that was quite lovely. It was not a “normal” acting role, though come to think of it “what is a normal acting role”?

As an actress it has given me opportunities that I would never have thought of. To study as an actress involves a lot of self-analysis. The more you “know your instrument” the better you can utilize yourself in a role. Studying characters you are portraying involves a lot of “why” questions. Why would someone behave like that? Also, some of my closest friends are actors/writers/ directors and creative artists that I met through both studying and working as an actress.

Playing/being an interviewer, I was given the direction they wanted: “a Barbara Walters type”, so it was fun to channel her. I watched many of her interviews and this is the fun part of being an actress; researching and studying people. Also, it was very interesting listening to these fascinating people talk about their particular studies and expertise. For example, Paul Zak, the professor who studies the release of oxytocin said, “If you go on a first date with someone, do something exhilarating like go on a roller coaster and it will be ten times better /memorable than having dinner because of the release of oxytocin.” I’m recently single so that’s a great tip.

Because I am based in Hollywood, Los Angeles, I have had so many wonderful opportunities including these recent roles. I am also about to film a role in a feature film this month as an FBI agent named Sally, who helps a crime novel writer solve the real-life crime and the murder of her best friend. We will be filming in Lake Arrowhead and around Los Angeles. As mentioned previously, now that California is opening up and we are largely a vaccinated state more production is happening here. Another big bonus is our weather. I’m looking forward to being on set again and I feel it. I had three auditions in one day recently and that hasn’t happened for me previously. I feel the momentum.

The best actors are bringing truth to a role and when you watch a performance, you forget you are watching an actor but are immersed in the story and invested in the character as a “real person”. I watched “Mare of Eastown” recently and no wonder Kate Winslett has won so many awards. She was so great in this, portraying a “messy, flawed detective”. I forgot I was watching Kate.

I have friends from all over the world now due to my being an actress. I am about to go and stay with some of my favorite people in France, I will be staying in their castle. I met them when I lived in London and they are so supportive of my career, watching everything I have ever been in. I had a friend reach out on Facebook recently that I lost touch with as we live in different countries. He said he watched the movie “Deany Bean is Dead” with his wife and they were so excited to see me in it. I love that. I have also been catching up on tv series and movies during this time and have recently been watching “Start Up”. It’s so good and a director I have worked with has directed a few episodes so that’s even more exciting.