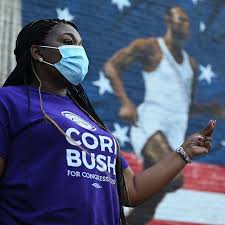 Activist and tech entrepreneur Cori Bush got the last laugh this evening defeating veteran Congressman Clay in the Democratic primary for the 2nd Congressional District.

Bush is a software engineer, Bay Area Democrat and marine veteran who represented San Francisco, along with San Mateo and Santa Clara counties in California’s 2014 state Senate race, and a loss to Sen. Dianne Feinstein in 2016.

With 67 percent of precincts reporting, Bush secured 62 percent of the vote, while Rep. Clay obtained 39 percent. The winning candidate needed 50 percent plus one to win the seat.

Democratic members of Congress in those two counties tend to back progressive candidates. Bush tweeted that she was overwhelmed by the outpouring of support.

“I am the first Democratic woman and the first Asian American woman to win this seat and represent the people of the 2nd District and the Bay Area in Congress,” Bush said in a phone interview with the Washington Post. “I am a dynamic individual, political activist and policy maker who has been a local, regional, state, and national leader for progressive values.”

Democratic voters in the 2nd District voted overwhelmingly to support Sen. Bernie Sanders during the 2016 presidential primary. Bush says she has the ability to become a bridge between the Democratic Party and Sanders’ political base.

During the primary election, both candidates represented progressive candidates from liberal backgrounds. Bush worked on the 2016 Hillary Clinton campaign and told Yahoo News she fell in love with the state of the presidential race while working in California. She also spoke about the challenges women in technology face in developing leadership and domestic violence policies as a member of the Tech Alliance.

Clay was initially an organizer with a group of veterans and the Vietnam generation who founded the St. Louis Veterans for Peace, according to his biography on his website.

Clay also regularly covers the media for the St. Louis Post-Dispatch, where Bush worked as a reporter.

The country’s second congressional district is located in the western suburbs of St. Louis and was created in 1985 to replace the old 3rd Congressional District, which had been wiped out by the Supreme Court.

The sprawling district has nearly three million residents, with one-third in metropolitan St. Louis. The population is 95 percent white and 63 percent of the residents are over the age of 65. Residents are concentrated in roughly two-thirds of the district’s 600 precincts, leaving large swaths of the districts unrepresented.

To address this underrepresentation, Bush says she wants to offer alternative services for veterans in Missouri.

“I think we need to combat veterans’ suicide, we need to expand access to quality health care, to things like housing, and most importantly, we need to allow veterans to transition back into civilian life. These are exciting challenges, and I am looking forward to working on them,” Bush said to Yahoo News.