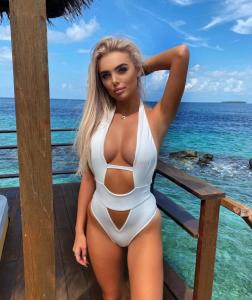 LOS ANGELES, CA, UNITED STATES, July 5, 2021 /EINPresswire.com/ — After being caught up in a police investigation into prostitution, a British influencer has fled Dubai.

After posting on a platform for guys looking for “friends with benefits,” Instagram sensation Bayley Jacob, 22, was accused of soliciting for sex.

It is allowed to visit the Seeking Arrangement website in the United Kingdom, however it is illegal to do so in Dubai. Dubai is in a Muslim country which has strict laws against indecent activities.

According to Gulf sources, it’s part of a larger crackdown on influencers who used loopholes to get into the country while it was under lockdown.

“I’m looking for something mutually beneficial and someone who can mentor me,” Bayley, who has 85,000 followers, had told interested parties. Bayley has no other known paying job, and is able to flaunt wearing many different expensive jewelry, one picture is of a Cartier Juste Un Clou bracelet she wears on her hand is valued at some $60,000 in the United States.

“I’m not looking for someone that is stingy and fake, so please don’t message me if you are.

“In the past, I’ve had a few successful arrangements.”

In Dubai, this might be considered solicitation for sex, which could result in a six-month sentence.

Bayley, who was born in London, is known for flaunting her opulent lifestyle to her followers by posing in high-end jewelry and bikinis all over the world.

Despite the fact that she was under investigation, Bayley was permitted to leave Dubai in March and travel to Bali.

In April, police raided her Dubai apartment and seized almost $13,500 in cash.

Bayley has returned to London, but she remained tight-lipped about the situation Friday night.

Her lawyers didn’t answer the phone either.

According to Foreign Office sources, it was a headache for the Dubai authorities.