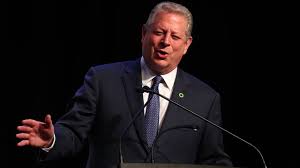 Former U.S. Vice President Al Gore told journalists at the first U.N. climate conference of the year in Bonn, Germany yesterday that most climate solutions are found in areas “not just separated by extreme weather but also separated by our daily lives,” reports Business Insider.

Gore mentioned that this month’s extreme weather disasters in the United States, including California’s deadly Camp Fire, Florida’s Hurricane Michael, and much of Europe, show that climate issues affect all countries.

“This week reveals that if we were left to our own devices, the climate catastrophe would be inevitable. If we were determined to play dangerous games, it would be already upon us,” he said.

The former vice president called on the people of the world to join the United Nations in demanding a global climate agreement that will succeed after the current agreement known as the Paris Agreement ends in 2020.

Climate scientists have been issuing warnings for years about the impending climate crisis, while governments have been failing to act and lend financial support to the people who must contend with such impacts, Gore noted.

“The world is still experiencing a host of climate disasters that define the scale of the global catastrophe looming,” he said. “Whether it is Caribbean storm surges, Mexican mountain floods, drought in Texas, drought in the Sahel, wildfires in California and now flood chaos in Malaysia.

“The world is right to expect that the government of the United States will take some responsibility in pursuing the solutions we must to this human tragedy.”

Gore went on to say that climate leaders must follow the same principles of the 20th Century.

He added that innovative solutions are found all over the world in areas such as renewable energy generation, fuel cell technology, thermal cooling systems, and new kinds of light.

“These solutions are not in short supply and they are required for the sustainability of life on this planet,” Gore said.

He went on to say that solutions to climate change can be found in everything from technologies that can enable individuals to drink from a recycled glass jug to hair dryers that don’t use harmful substances.

“We have to look very hard at how we live our lives and what we do to enhance the health of our planet. Many of the solutions are found in things that we have no use for or shouldn’t be using. People in Malaysia are now putting solar power in their refrigerators and single-use plastic is being replaced by biodegradable plastic that they can drink from,” he said.

Gore echoed the call of U.N. Secretary-General Antonio Guterres, who earlier this week was among those condemning the most recent extreme climate events as the worst in a century.

“We must act and we must act now. But we can act both individually and collectively. We have to build the sustainable economies that grow our economy, but also grow it in a way that protects the environment,” Guterres said.

Gore said that climate solutions are working and that the truth is out in the open, but that the challenge is not to sell the solutions.

“We have a strategy for turning the tide on climate change. We have solutions for moving away from fossil fuels toward sustainable energy and of course finally adaptation that gives us the opportunity to mitigate the worst effects of climate change,” he said.

“But it is up to every single one of us and every single organization to begin to think in a new way to accelerate the pace of change. Not because of any inherent superiority or capacity but because it is the right thing to do,” Gore added.