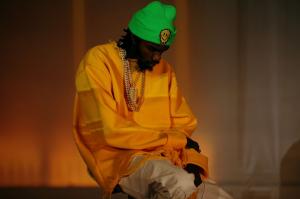 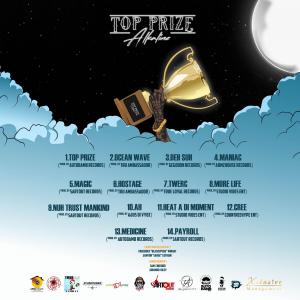 His 2016 debut on the Billboard charts was evidence of unlocking a new level, so it is no surprise that Alkaline’s 2021 sophomore album would follow suit.

Five years after New Level Unlocked Alkaline has shown us that he remains a top talent in dancehall reggae with Top Prize. His evolution as an artist continues in his high-wire lyrics and storytelling”
— Diego Herrera, Reggae/Caribbean Music Pandora.

MANHATTAN, NEW YORK, UNITED STATES, May 30, 2021 /EINPresswire.com/ — If his 2016 debut to the Billboard charts was evidence of unlocking a new level, then it is no surprise that his 2021 sophomore album would follow suit.

Top Prize after its first initial week of sales and streams debuted at the #2 position on the Billboard Reggae Album charts and #56 on the US Current Albums Sales chart. The album also went on to securing the #19 position on the Heatseekers charts which highlights “Breaking and Entering” music, issued weekly by Billboard magazine.

Doubling his prior effort, Alkaline’s chart standing globally speaks immensely as an independent artiste demonstrating his marketability. This is evident with his additional placements on the Billboard Emerging Artiste charts at #37.

“Numbers don’t lie, and the placements support our stance from day one. It’s a great day for the artiste, the team and the fans but more importantly the genre and all independent artiste out there. Alkaline remains focused on his craft and to the Vendetta Fanbase which is growing extensively: loyalty above all else, stand firm and stay the course” states Shuzzr, Alkaline publicist.

With over 6 major DSP throwing their support behind the artiste, pre-orders sales piloted the album onto several charts ushering in the way for the Billboard debut.

“Five years after New Level Unlocked Alkaline has shown us that he remains a top talent in dancehall reggae with Top Prize. His evolution as an artist continues in his high-wire lyrics and storytelling, and fans are reacting to the lead singles as well as album cuts like “More Life”, “Hostage” and “Magic”. It’s also worth mentioning that he carries the entire album on his own – something that has become less common in this era of feature laden singles. Despite the lack of guest appearances there’s never a moment on the album where he slows the momentum as his lyrics drive the listeners through each song”- states Diego Herrera, Reggae/Caribbean Music Programming, Curator and Creator services at Pandora.

The album captured the #1 spot on Amazon Music’s best-selling album charts in three categories – International, Reggae and Caribbean& Cuba for several weeks and saw all 14 tracks from the album occupying Deezer Top 100 playlist in Jamaica. On YouTube, 10 of the 14 tracks have already amassed over 10 million views collectively and has been trending on the popular streaming platform ever since.

On the Canadian iTunes charts, it debuted at #7 and secured the #1 spot on the Apple music charts in Jamaica; the album then went on to being the #1 on Apple music reggae album charts worldwide. Currently at #10 on the US iTunes chart, Alkaline’s album also debuted at #28 on the United Kingdom iTunes chart.

Top Prize landed at the #1 spot on the iTunes reggae charts and peaked at #6 on the worldwide charts, sharing the top 10 with the likes of J. Cole and Nicki Minaj who occupied the #1 and #2 spots, respectively.