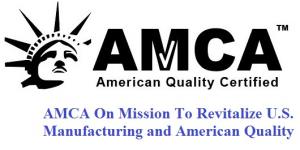 The ‘American Quality Movement’ hits center stage as AMCA goes viral with its push to spark a new industrial revolution.

Our competition for American business is no longer in the next county or the next state, it’s around the world.”
— Karl Rove

NEW YORK, NY, USA, September 14, 2021 /EINPresswire.com/ — AMCA (http://amcacert.com) announced today its ambitious plans to revitalize America’s manufacturing sector by using quality as the driving force. According to an AMCA spokesperson, the company and its partners are financing a grassroots movement to increase the global competitiveness of U.S. manufacturers. The group has named their mission the ‘American Quality Movement.’

AMCA offers U.S. based OEM’s, machine shops, distributors and exporters an opportunity to achieve AMCA and ISO certification. As a pro-American quality certification, AMCA is widely accepted as America’s ‘Gold Standard’ in quality recognition for U.S. manufacturers. Whereas ISO certification is based on international standards set forth by foreign governing and oversight bodies. Both AMCA and ISO play an important role to a company’s efficiency, productivity and profitability. The key difference is AMCA boldly puts America first and does so unapologetically. Thus, Patriots are flocking to AMCA in droves, according to the company.

AMCA founder Don LaBelle said their mission to revitalize the U.S. manufacturing sector is under attack by American globalists, socialists and others with anti-American views and dreams of a ‘one world’ utopia. “It’s important to clarify, AMCA understands the importance of international trade as well as a country’s right to remain independent,” said LaBelle.

He concluded, “The United States is doomed if we don’t reverse our dependence on foreign goods and return to our roots as the manufacturing hub of the world with a reputation for producing the highest quality products on the planet. Let China have their cheap goods and American manufacturers will dominate them with quality, value and innovation.”

US-based manufacturers, machine shops, distributors and other industrial suppliers can submit an application for quality certification at https://amcacert.com/get-quality-certified/

About AMCA
AMCA (American Made Customer Accredited) is the first pro-American quality certification for the U.S. manufacturing sector. Being AMCA certified ensures your company is recognized for quality and integrity independent of ISO’s foreign certification schemes. Companies certified to AMCA standards are over-seen and accredited by their own customers… making AMCA the only truly impartial accreditation in quality certification. AMCA is the ‘Gold Standard’ of American quality in the manufacturing sector. Learn more at http://www.amcacert.com