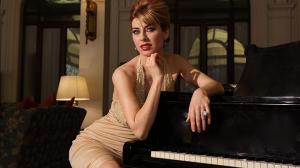 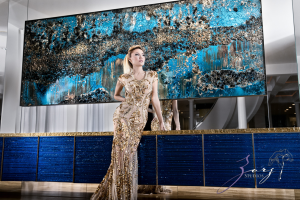 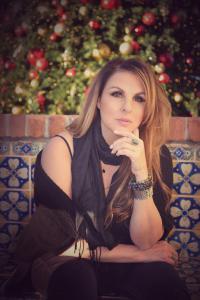 RAQUEL AURILIA New Single “Reaching Out for You” with CAM CARTER

We are over the moon. This is a great testimony that Love and Compassion have NO border and NO ceiling. It is ultimately up to each of us to do nothing or to support and give to those in need.”
— Val Nzhie, Chief Investment Officer, Bervann

ILARIA DELLA BIDIA:
Italian (Tuscany), born and raised in the province of Lucca, ILARIA is a singer, actress, performer, pianist and composer. She got involved into music at an early age and graduated in piano at the Conservatory of Lucca. In 2011, ILARIA met with the World’s most Beloved Tenor ANDREA BOCELLI and the two have been inseparable since then. ILARIA has been performing with ANDREA BOCELLI as Guest Star all over the world in Tours, Festivals and Special Events. To list a few:
* ANDREA BOCELLI – Cinema Tour 2015 – 2016 – 2017 – 2018;
* ANDREA BOCELLI – Passione Tour 2014 – 2015;
* Intimissimi On Ice in 2016;
* Celebrity Fight Night Italy in 2014 – 2016 – 2017 – 2018;
* Starlite Festival Marbella, Spain in 2015 and 2017;
* Cap Roig Festival 2018;
* ANDREA BOCELLI Sì world Tour 2019;
* Winter at Tantora Festival Saudi Arabia in 2019
ILARIA DELLA BIDIA sings and has recorded in Spanish, Russian, Swahili, French, Armenian, Portuguese, Arabic, Jewish, English and Italian.

LILLIAN GORBACHINCKY:
Classically trained singer and songwriter, Lillian is a multidisciplinary artist whose talent combines a Classy style and a Luxury flavor. Friend of the Bocelli family, she enjoys singing alongside ANDREA BOCELLI and supporting the ANDREA BOCELLI Foundation in its various initiatives. When she is not performing, Lillian Gorbachincky is a High-end Luxury Designer influenced by King Louis XIV of France. Lillian is the proud owner of Cosmopolitan Glass & Metal, the premier source for artistic and architectural glass and metalwork for today’s Royal Elite brands such as Tiffany & CO., Graff Diamonds, Christian Dior, and Chanel; AD100 Designers and architects such as Peter Marino, Stephen Sills, Jamie Drake, Fox-Nahem; and the private nobility of the Upper East Side–all of whom, like King Louis, seek the ﬁnest design craftsmanship in glass and metalwork. Daughter of the Lead Ballerina at the State Ballet in Armenia, Lillian was always privy to human expression and her parents’ gatherings of artists at home constantly inspired her. The famous Tiffany & Co. blue would wind up coloring her portfolio. After her ﬁrst milestone project with the iconic jeweler for their boutique at Printemps in Paris in 2007, she worked on over forty Tiffany & Co. stores worldwide. In 2013, she collaborated with the brand’s Creative Director to create whimsical window installations inspired by The Great Gatsby, which today are preserved in the Tiffany & Co. archive. While her artistry continues to deﬁne the facades of the world’s top luxury brands, it is increasingly coveted for interior, residential spaces: a glass fountain wall for a prominent collector glistens uptown, and her famous “million-dollar kitchen” awarded 2019 Best in Show Furniture by the ASID (American Society of Interior Designers) is now on view in her gallery.

The BERVANN Foundation and ANDREA BOCELLI Foundation have gained great traction this month on the event and hope to provide an elegant virtual soiree filled with insightful discussions from Business thought leaders and outstanding entertainment by a mix of highly talented performers from different backgrounds. With the holidays being spent in lockdown or quarantine, both charities hope to crystalize Dec 30 to Celebrate Love, Spread Hope and Create Opportunities. They therefore encourage their attendees to invite friends, family members and colleagues to join them and celebrate virtually altogether while contributing to the Greater Good and working toward Building a Better Future for Our Children.

The Charity GALA will be held virtually on Wednesday December 30, 2020 from 1pm – 4pm EST.
GALA Info and Registration can be found at: https://bervann.com/