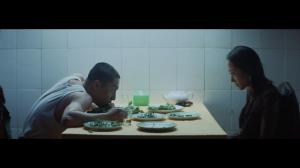 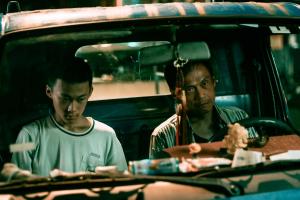 We hope those who have chance to watch this film can be strongly concerned about what they are doing to us and other neighbor countries and regions.”
— Yun Hsien Huang, filmmaker

NEW YORK CITY, NEW YORK, UNITED STATES, June 4, 2021 /EINPresswire.com/ — The 12th edition of the NYC Independent Film Festival which starts coming Sunday, has a considerable range of Asian films in its package. The NYCindieFF has always had a lot of attention for world cinema and in this way is able to conjure up special gems from cinematography for its audience. Here is a selection from the extensive Asian range.

As a blind beggar enters the late subway train in THE GAZE eight indifferent people all turn away. But after he passes, a child points out a 50 dollar bill on the floor and the tension rises. Everyone jumps for the money, and after a long struggle the salesman gets it. But then, the beggar returns. Korean filmmaker Wonin Kim says this work of fiction was based on something he witnessed himself nine years ago. ,,A blind beggar was walking through a subway train with all the people turning away. But when he dropped his basket, dropping coins and bills everywhere, everybody looked at the money. After seeing the eyes of those people in that split second, I wanted to show the inner selfishness and greed of the human condition, through the turning of eyes and some cinematic imagination.”

Special mention is for the Chinese movie BEING MORTAL. The film is based on a Chinese novel ‘Deng Dai’. Xia Tian transfer her job back to her hometown in order to take care of her dad who get Alzheimer’s for over ten years. She thought it will be a comfort for her parents, but as the disease gets worse , the stress of life she gets to learn, and the only thing she can do is just wait. Touching and professionally made, the story sticks in your mind. Not at least because the acting is so good. It’s all described in a very realistic way but with discretion without any emphasis, makes us participate authentically in this drama.

Set against Hong Kong’s explosive politics from the student-led anti-government protests in APART five young students discover the harsh reality of socio-political impact on their life and relationship. When idealism meets reality and the personal meets the political, they find they are weathering through storms. Social turmoil within families, love life and work. Charting some of the most vital moments in Hong Kong’s history, “Apart” is a handsomely lensed romance and heartfelt family drama mixed with documentary and fictional footages that tracks the characters from their free-thinking teens into adulthood.

BUBBLE is an urban tale of love and sacrifice set in a mysterious restaurant hidden in an alleyway. On an ordinary night, a man eats a lot of herbal plants in front of a woman, transforming himself into the woman’s food. BUBBLE doesn’t follow the traditional dramatic traits as it doesn’t show off strong conflicts and twists. Instead, you can view the entire story as a ritual, a sacred ritual of love. It’s natural and not overwhelmingly sentimental. The woman knows that the man is sacrificing for her. She’s grateful, yet she’s used to it. She knows it’s tough to be apart, but she yearns for the final result.

LITTLE HILLY is an animation short film from Taiwan. Hilly is a 10-year-old silent Taiwanese girl, nobody was concerned about her depression and the pressure she suffered from everyday life. Hilly hates that she always oppresses herself, and also hates the world controlled by adults. What does Hilly really want to speak out to the adults? Filmmaker Yun Hsien Huang: ,,My country is just like Hilly in the film, Taiwan is always ignored and told to be silent and self controlled. The main international pressure is from our big and strong neighbor country, which is anxious to annex all Chinese speaking countries. We hope those who have chance to watch this film can be strongly concerned about what they are doing to us and other neighbor countries and regions.”

GROWING PAINS is a film based on a true story from the director’s past. Witnessing his father’s death when he was fourteen, death has become a lingering shadow as part of his life ever since. Growing Pains seeks to become a means of support for those who are trapped in a survivor’s guilt after experiencing their loved ones commit suicide. Taiwanese freelance filmmaker Lin Po-yu has always been good at capturing realism in his works, with most of them inspired by everyday life. His films are described as natural, pure, restrained and gentle. In GROWING PAINS a fourteen-year-old boy is sick of his worn-out shoes, which his father never replace for being too deep in debt. One day, after a confrontation with debt collectors, his father suddenly buys him a pair of expensive sneakers. Little did Yao know, this is the start of a painful tragedy.