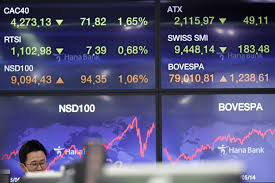 Asian markets have been mixed this morning after fresh fears of a war between the US and China rocked markets in China, Hong Kong and Taipei overnight.

Apple, Microsoft and Alphabet shares were down and Spotify stock, which went public last week, fell 6%. Boeing, Caterpillar and Bank of America shares were all down almost 2%.

Oil prices, meanwhile, rose almost 2%, and the spread between German bunds and the US 10-year bond fell.

Hong Kong markets were further down, with the Hang Seng Index down 1.22% and the Hong Kong China Enterprises Index 0.73% lower.

Korea Composite, which was 0.82% higher last night, was more than 1% higher in early morning trade, but was down 0.9% at 9am UTC. Japan’s Nikkei share average was down 0.03%, and the Shanghai Composite was slightly lower than last night. The index closed last night at its highest level since 2008.

Thailand, Singapore and India gained this morning, with stocks rising between 0.15% and 0.45%.

In Hong Kong, investors “are still relatively upbeat despite the selling,” wrote K. Y. J. Lau, a research analyst at Societe Generale in Hong Kong. “The major top line concerns are still that of trade negotiations with the US, debt-to-GDP ratio as well as how the economy is going to do. But the basic fundamentals seem to be still holding.”

Expectations are for a third-quarter US interest rate rise this year and the European Central Bank to end its quantitative easing program. Elsewhere in Asia, there are expectations that the Bank of Japan could end its own easing programme at the next policy meeting, which will be held on July 30-31.

Japanese markets, seen as more sensitive to any US threat to restrict Japanese cars, will likely take cues from US markets, as well as the ECB and Bank of Japan policy meetings, this week.