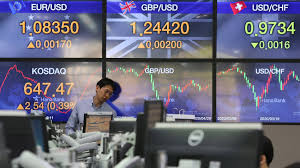 Asian shares slipped Wednesday as a surprise increase in the tariffs planned on Chinese imports in June hammered investors’ hopes of a positive resolution to the simmering trade conflict.

China has announced $16 billion in tariffs on 128 U.S. products in retaliation for U.S. tariffs enacted last month. It was unclear what percentage of the total had been registered and would follow last month’s 10 percent tariffs, but traders saw a 4-6 percent hit in trading around the world after a strong rally in the previous session.

Australia’s S&P/ASX 200 was off 1.3 percent by Wednesday morning, and Hong Kong’s Hang Seng was down 1.1 percent, with investors in Beijing piling in to book profits from a recent run-up, according to market reaction. Seoul’s Kospi and Shanghai Composite fell 0.6 percent. Taiwan fell 0.8 percent.

Tokyo’s Topix was down 0.7 percent.

Stocks around the world started the week higher on hopes the Trump administration and China would reach an agreement to protect intellectual property and end trade tensions. But Trump showed little interest in halting his trade war with the world’s second-largest economy, and there have been signs of little appetite among Chinese leaders to push for a deal.

Trump said Monday that there was “a very good chance” a trade deal with China would happen and mentioned a “next couple of weeks” for talks. However, he said at a news conference that officials were looking at raising the tariffs on Chinese imports by another 10 percent and also could put higher tariffs on some cars.