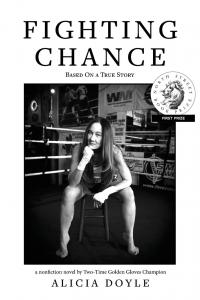 I Want To Know Your Story is more than a YouTube channel, it is a platform that gives people a place to be heard.

“Everyone deserves to share their story in a space with no judgment,” said Grodin, who believes that everyone’s story is important, and sharing our stories creates a community among strangers, where people can find connection in similarities they have with others.

“Simply hearing that Alicia was in a place where she wants to share her story, most recently writing a book, I was all for sitting down for an interview with her,” Grodin said.

Since Fighting Chance was published in February of 2020 – just one month before the global pandemic hit – it has won three literary awards: First Place in Creative Nonfiction and Memoir in the 2020 North Street Book Prize Winning Writers Competition; 2020 WBAN “Cool Story of the Year”; and 2021 Best Autobiographical Book.

“It was incredible to sit down with Alicia and hear her talk about overcoming traumas from early childhood into her late twenties,” Grodin said. “Amazed by what she heard and experienced while on assignment at a boxing gym, it was clear from her interview that she still never expected boxing to be her salvation.”

“Allowing herself to be open and accept a different perspective about something she had previously passed judgment on fit so in line with why I do these interviews,” Grodin continued. “You just never know….our judgments and assumptions may just get in the way of some of the greatest possible connections and relationships. Alicia’s story is one of strength, empowerment, and ultimately giving back. I am honored to have gotten to spend the time with her in the ring that day, thankfully just for an interview and not a bout.”

In April of 2020, Slavica Bogdanov, a 20-time-awarded Canadian screenwriter and owner of Empowering Entertainment, partnered with Doyle to bring her true story to the Silver Screen.

Bogdanov chose Doyle’s story because “I loved the courage and tenacity, and I was touched by the heart of a fighter who fights for her right to stand up for herself and win at the game of life.”

Doyle, a journalist for more than three decades, discovered boxing at age 28 in the late 1990s when she went on assignment at a boxing gym for at-risk youth. For two years, Doyle simultaneously worked as a newspaper reporter while training and competing as a boxer, making her one of only a few hundred women in America who infiltrated this male-dominated sport. During her boxing career, she won two Golden Gloves championship titles and earned three wins by knockout – and her pro debut at age 30 in the year 2000 was named The California Female Fight of the Year.