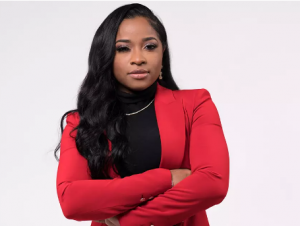 “Half the hysterectomies performed annually in the United States are performed because of uterine fibroids,”
— Dr. Yan Katsnelson, Founder and CEO, USA Fibroid Centers

Johnson talks about her personal experience with fibroids to spread awareness of these non-cancerous tumors that affect millions of women. Yet, much is unknown about their underlying cause. As part of the USA Fibroid Centers Ambassador Program, Johnson joins other celebrity and well-known fibroid survivors to connect with women nationwide to advocate for better research, diagnosis, and treatment of fibroids, so minimally invasive treatments are discussed and offered as options.

Johnson’s ordeal began in June 2013 when at age 30, she started having sharp pains in her lower abdomen. An X-ray revealed two small fibroids inside her uterus.

Studies conducted at the Women’s Clinical Health Research Center at the University of California show that uterine fibroids are extremely common and are present in at least 25% of premenopausal women. When Johnson went to seek treatment, hysterectomy and myomectomy were presented as the only options.

“I had heard of hysterectomy before,” Johnson said, “A few of my family members had gotten one, but they were older, so I was surprised it was being offered to me as an option.” Knowing that she wanted to have more children, Johnson opted to have a myomectomy done. The experience has fueled Johnson’s desire to share her experience with the hope that other women will demand choices in their own care.

“Half the hysterectomies performed annually in the United States are performed because of uterine fibroids,” said Yan Katsnelson, M.D., Founder and CEO of USA Fibroids Centers.

However, research has shown that a large percentage of these procedures are considered medically non-necessary. Minimally invasive UFE treatment offers a high success rate of removing tumors and relieving symptoms. “UFE offers the additional benefit of preserving fertility, yet many women are unaware and often not informed of less invasive treatment options,” Katsnelson said.

Johnson, as a USA Fibroid Centers Ambassador, is part of the organizations’ new fibroid awareness initiative, “Talk About U” Instagram Chat Series that encourages women to speak out and share their fibroid experiences. Ambassadors are paired with medical experts to discuss various topics about fibroid disease.