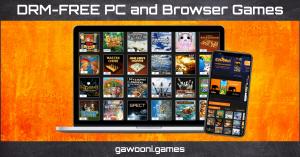 The games portal GAWOONI.GAMES is operated in over 20 languages and offers players DRM-FREE PC games and browser games. The portal positions itself as a bridge between East and West. Special marketing focus is placed on the digital emerging markets of Southeast Asia and India. No other western publisher has this focus and that makes GAWOONI PLC unique in the international games market.

GAWOONI PLC is currently experiencing high demand from independent game developers who see the games portal GAWOONI.GAMES as an opportunity to expand the digital distribution of their products into interesting new regions.

Frank Holz, CEO at GAWOONI PLC has been working intensively in Southeast Asia since 2010, advising local governments on how to build up the local games industry. His experience and network is the basis for successful positioning as a bridge in the games market between East and West. Cultural differences between Southeast Asia, India and the West make it difficult for western games companies to reach these important markets. Meanwhile, game developers from Southeast Asia and India lack the visibility to be noticed in Europe and the USA. GAWOONI PLC acts as a bridge, connecting these two regions of the global games industry, to the benefit of both sides. The games portal GAWOONI.GAMES is the publishing tool for it.