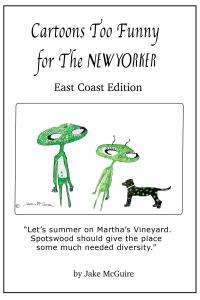 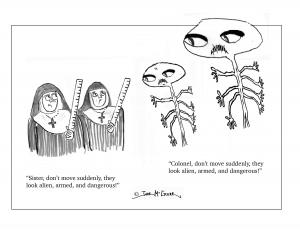 Nuns with Rulers at a Face-off with Menacing Aliens 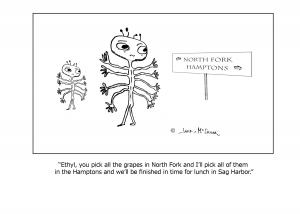 Grape Pickers in the Hamptons

“Not Just Wickedly Funny,” Says Professor, “But a Whopper of a Typo Will Have Cartoon Lovers Buying This Knee-slapping Book for All Their Friends.”

McGuire’s cartoons are too funny and edgy for The New Yorker Magazine…hence the name of the book”
— Scott Sklar, Professor George Washington University

As of today, you’ll be joined by two green aliens and their black dog.

Award-winning Washington, D.C. author, publisher and travel photographer has just published a hilarious book of “New Yorker Style’ cartoons, and picked his favorite cartoon to grace the cover of the book. The cartoon is of two green aliens and their black dog planning to ‘summer’ on the popular island.

“McGuire’s cartoons are too funny and edgy for The New Yorker Magazine,” says Scott Sklar a George Washington University Professor who was raised in New York City, “hence the name of the book. Most magazine cartoons are ‘gag’ cartoons with a simple punch-line, whereas McGuire’s have overlapping layers of humor. The cartoon gracing the cover of this new book, for example, contains five different funny elements, especially for those who ‘get’ the black dog reference.”

This book is an East Coast edition and a West Coast version will be out this week.

McGuire, who comes from a family of artists and architects, currently has 12 coffee table books in print but decided to expand into cartoons. “Many magazine cartoons are a bit simplistic,” says McGuire, “So I like to weave in complexity by including current references to food, wine, travel, science, medicine, and cultural news, as well as notables like Elon Musk, Jeff Bezos, Lady Gaga and George Clooney. “In fact, he says, “spell check doesn’t always catch super modern words like bitcoin, blockchain, and dogecoin.”

“I love drawing aliens because, people are hard to draw and talking aliens are a juxtaposition between reality and non-reality adding more humor. My second favorite cartoon, perfect for all the Catholics in New York, New Jersey, and New England who were whacked by nuns with rulers when they were kids, shows nuns with rulers at a stand-off with menacing looking aliens.”

McGuire points out an expression in the cartoon world, “It is not the ink, it is the think,” meaning no matter how well drawn the cartoon is, it needs to be funny! “And,” he says, “cartoons by nature are caricatures, so the drawing can be wildly outside-the-box as long as they represent the characters and convey the humor.”

Now, see if you can spot the typo, caused by predictive text and not caught by spell-check. In the book’s introduction McGuire explains why he generally doesn’t draw political cartoons:

“I don’t produce political cartoons as most politicians, like the late Donald Trump, create their own outsized caricatures by their own buffoonery.”

“Not sure I can change it,” says McGuire, “Besides Trump is cluelessly ‘late’ for anything noble: civility, dignity, grace, honor, kindness, etc.”

And, McGuire says all the cartoons are available as framed wall art for homes, restaurants, vineyards and offices. He says many of them can be customized with the name of you school, winery or restaurant.

Note to editors, blogs, and feature writers: Feel free to use the book cover and cartoons for your stories. McGuire can promptly send you the first 12 pages as a PDF so you can quickly get the flavor of the book! And he is available for phone interviews.
Jake McGuire
McGuire Communications
+1 703-888-6320
photojake520@gmail.com