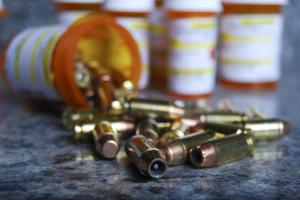 “What the hell’s wrong with us?” governor asks. “Too many psychotropic chemicals and a failed mental health system that may breed violence and suicide for a start,” CCHR, mental health watchdog responds.

“What the hell’s wrong with us?” governor asks. “Too many psychotropic chemicals and a failed mental health system that may breed violence…,” CCHR responds.

LOS ANGELES, CALIFORNIA, UNITED STATES, June 1, 2021 /EINPresswire.com/ — With a spate of recent acts of senseless violence, one of which beset San Jose in California, killing nine, the state governor asked “What the hell is going on in the United States of America? What the hell is wrong with us?”[1] The mental health watchdog Citizens Commission on Human Rights International (CCHR) says one thing wrong is a failure to, at least, evaluate past and existing mental health programs and treatments that have not reduced violence in the country, but could potentially be contributing to it. Government appropriations have been poured into an abyss of failure, CCHR says.

The group points to a review of scientific literature published in Ethical Human Psychology and Psychiatry regarding the “astonishing rate” of mental illness over the past 50 years which revealed that it’s not “mental illness” causing the problem; rather, it’s the psychotropic meds prescribed to treat it.[2]

In 1967, a group of prominent psychiatrists and doctors met in Puerto Rico to discuss objectives for a psychotropic drug utopia for “normal humans” in the year 2000. Their plan included manufactured “intoxicants” that would create the same appeal as alcohol, marijuana, opiates, and amphetamines, producing “disassociation and euphoria.” The meeting concluded, “Those of us who work in this field see a developing potential for nearly a total control of human emotional status, mental functioning, and will to act. These human phenomena can be started, stopped or eliminated by the use of various types of chemical substances. What we can produce with our science now will affect the entire society.”[3]

CCHR says the U.S. is seeing the effects of this today: IQVia Total Patient Tracker statistics show almost 77 million Americans were taking psychiatric meds in 2020, of which 45 million were on antidepressants, the latter up 24% from 34 million in 2006.[4] The most used of all prescription drugs in the U.S. in 2015-16 were central nervous system stimulants for ages 12–19 and antidepressants for ages 20–59.[5]

David Healy, a leading psychopharmacologist and a professor of psychiatry, notes that the main causal factor behind suicide and violence while taking antidepressants is increased mental and/or physical agitation, which leads to about 5% of subjects taking the drugs to drop out of clinical trials, compared to only 0.5% of people on placebos.[6]

By extrapolation, if 5% of the 45 million Americans taking antidepressants experienced “increased mental and/or physical agitation,” that represents 2.2 million people. How many could potentially become so agitated that they would carry out violent acts? It’s playing Russian roulette with their lives and governments need to be more alert to this, said CCHR.

Media quote experts saying that violent individuals are “mentally disturbed,” or have “untreated mental illness,” or “stopped taking their medication,” fueling calls for stricter mental health laws and funding. But that doesn’t explain the level of violence we are seeing or what drives a person to pull a trigger, stab or intentionally crash an airplane, continued CCHR.

Further, mental disorder is not a predictor of aggressive behavior; however, prescribed mind-altering chemicals are documented by drug regulatory agencies worldwide to cause violent, aggressive and suicidal behavior in a percent of people taking them.

Governments are advised to increase involuntary commitment powers and the enforcement of psychiatric treatment—a system that has already failed and, which, CCHR urges, needs investigation.

• S.W.A.T teams with tanks turned up at the house of a single African American mother in Michigan because she refused to give her 12-year-old daughter an antipsychotic.[7]

• Until 2004, Child Protective Services could criminally prosecute parents who chose to not administer or who withdrew their child from a dangerous psychotropic drug. This practice was only outlawed because of the actions of CCHR and children’s rights groups.

• Teens electroshocked 50 times a day with a skin shock device to forcibly change their behavior, a practice the United Nations has condemned as torture.

CCHR stresses that consumers and government officials should become better informed about the downside of enforcing treatment that has never stopped violence and may be contributing to it. The group is directing policy makers and law enforcement to its online report Psychiatric Drugs: Create Violence & Suicide, produced in 2018. This calls for a national database to be established to collect data on potential drug use in acts of mass violence.

The group, established in 1969, has a tremendous amount of research on the mental health system and helped obtain more than 190 protective laws.

[1] Carla Marinucci, “Newsom after mass shooting: ‘What the hell is wrong with us?’” Politico California, 26 May 2021, https://www.politico.com/states/california/story/2021/05/26/newsom-after-mass-shooting-what-the-hell-is-wrong-with-us-1384129; “San Jose shooter’s ex-wife says he told her he wanted to kill people at work,” California News Times, 28 May 2021, https://californianewstimes.com/san-jose-shooters-ex-wife-says-he-told-her-he-wanted-to-kill-people-at-work/362908/