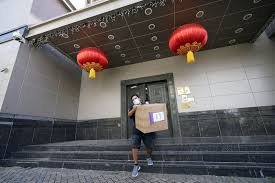 Days after U.S. Secretary of State Mike Pompeo accused China of attempting to “harass” U.S. citizens in the country, Beijing has ordered the U.S. consulate in Chengdu to close by the end of the year.

The U.S. State Department said it was unclear whether the closure would occur on Wednesday, but any closures would begin “a period of deliberation over the scope and terms of our presence in Chengdu,” a spokesperson said.

The Chengdu consulate, which serves the southwestern province of Sichuan, has been under fire over the past year from the Trump administration. As part of an escalating tit-for-tat trade war with Beijing, U.S. officials routinely warn U.S. citizens that it is dangerous to visit the country due to its poor cybersecurity and suspicion of Americans’ influence.

In the past, the consulate has been the scene of protests against the Trump administration.

In April, one Chinese man was arrested outside the U.S. embassy in Beijing after throwing ink at a sign that read “China Warns U.S. Do Not Disturb Beijing Embassy.” In September 2018, a police officer was arrested on suspicion of extortion and assault for confronting a protester on the sidewalk.

On Monday, U.S. officials expressed further concern over the safety of American citizens in China when Secretary of State Mike Pompeo accused Beijing of harassing U.S. citizens and demanding American businesses close their stores in the nation.

“We are going to stay vigilant on this, because this is an area where China appears to be trying to intimidate U.S. companies and citizens — we’re on high alert,” Pompeo said on Monday during an appearance at the Aspen Institute in Colorado.