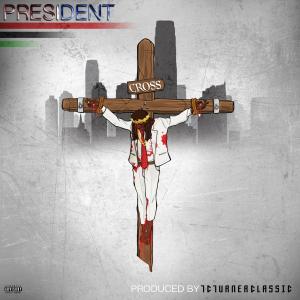 I created “Cross” to support BlackOut Movements, in order to enfranchise as many as possible to carry the cross of racial justice. I’m thankful to NAN, RWDSU, #BlackOutWholeFoods and #BlackDadsMatter”
— Michael “President” Anderson

NJ-based Hip-Hop Artist President kicked off a historic campaign today in Newark, NJ with the release of “Cross”. “Cross” was created to raise awareness for BlackOut Movements, which is a coalition focused on creating racial equity solutions for Public, Private, and Philanthropic institutions. Various initiatives include #BlackOutNewark #BlackOutWholeFoods and #BlackDadsMatter campaigns.

“Cross” was first posted to Youtube at 12AM EST. The video opens with a reference to a now infamous October 3, 2020 incident, in which the prominent member of Newark’s community was detained improperly for shoplifting at Whole Foods Newark. Today’s launch coincides with #BlackOutWholeFoods’ announcement that Civil Rights, faith organizations, activists, a leading retail workers union are partnering in 2021 to demand Governments and Corporations address institutional racism. Retail Wholesale Department Store Union (RWSDU) joined the #BlackOutWholeFoods coalition.

In a response to the October 3, 2020 Whole Foods Newark incident and others, Reverend Sharpton’s National Action Network (NAN) stood with #BlackOutNewark, recently sending a formal letter to Whole Foods CEO John Mackey requesting a meeting to discuss systemic racial discrimination, and strategies for preventing similar conduct in the future. NAN argued the mistreatment of consumers and workers violates basic standards of justice and amounts to discrimination.

“BlackOut Movements coalition arrived in response to several incidents where it became clear to me, many view my race as a limiting factor. On almost a daily basis, I am forced to deal with Police being utilized to threaten me in my own home and community, simply because society has been trained to view Black men as threats. The launch was delayed today because The State of New Jersey sent NJ State Police to my home because they interpreted the message of this music as potentially “dangerous.” I partnered with #BlackOutNewark #BlackDadsMatter and with NAN and RWDSU for #BlackOutWholeFoods, in order to involve and enfranchise as many as possible to carry the cross of racial justice. We hope “Cross” engages the Hip-Hop community to utilize Culture and our Capital to Change our Communities. We need corporations that lord over communities to play their part in creating equity, and the public sector to end systemic racism in all facets of life. ”

“Cross” by President is available where music is sold. “Cross” is the first visual released from President’s Billions In My 30s Album/Movement. NAN and RWDSU are expected to announce the #BlackOutWholeFoods partnership officially early next week.