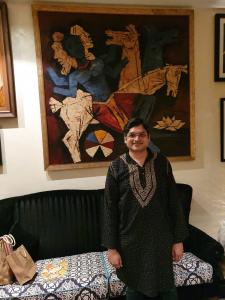 Government advisory firm Sapio Analytics has made an addition to its top management, by appointing former Director of Police Prashant Nikam as Chairman

Nikam has been in many leadership roles in the Indian Civil Service in the Ministry of Home Affairs and Ministry of Railways, having held prestigious positions such as the Director of Police in Ministry of Home Affairs and Financial Advisor in Indian Railways. He is also a Public Policy Graduate from London School of Business and holds MBA from Cranfield School of Business. In his illustrious career with the Government of India, he has played an important role in shaping policies within the government.

“I am very excited to join a talented team of youngsters who think not just with their minds but also their hearts”, says Nikam about his appointment in Sapio Analytics. Sapio Analytics was founded in 2019 by serial entrepreneurs Ashwin Srivastava, Hardik Somani, Shripal Jain and others. It has now currently established itself as a major player in policy making within Indian governments having conceptualised and executed one of the largest initiatives for employment and personalised guidance of blue collared workers in India called Saksham, and having also innovated a digital census system for unorganised sector in the State of Uttar Pradesh. The Prime Minister of India has referred to the works of Sapio Analytics in the past and is regularly apprised of its digital innovations in decision making. Lord Rami Ranger CBE, Lt Gen K J Singh and Dr Dinesh Tryambake are part of its global advisory board, with patrons in form of various world leaders.

“My vision is to make Sapio Analytics a global brand. We will strive to make Sapio a trusted brand for governments across the world by creating customised solutions to help improve governance and policy making process”, adds Nikam about his role and vision for the company. “It’s an honour to get an opportunity to work with Prashant Nikam who has proven himself to be a government officer driving changes within governments and is able to appreciate the power of new age technologies in driving such change. Sapio has formed its geopolitical division, heritage restoration division, media arm, electric vehicles division and healthcare divisions, with each division focusing on creating a major positive dent in the global society, creating a new system of governance involving citizens across all departments. And we need exceptional leaders with global mindset to lead us into the same”, says Srivastava about the appointment.

Sapio Analytics has recently been in news for its smart healthcare division and its efforts to fight COVID-19 in India.