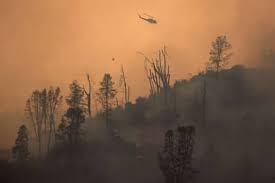 Temperature and wind were doing more to worsen the conditions in Northern California as firefighters extended containment lines around multiple blazes raging for a second day, according to the California Department of Forestry and Fire Protection (Cal Fire).

Cal Fire reported that during Tuesday’s blaze counts, 53 residences and 13 outbuildings had been consumed in the wildfire in Lake County, the seventh-largest in California’s history. The fire has destroyed 1,600 homes, other buildings and 300 vehicles, with eight destroyed buildings on containment lines as of Tuesday night.

“Three firefighters suffered minor injuries due to exposure to hot and dry conditions,” the agency reported. The estimate on total acreage burned by the Lake County blaze is now at 68,093. An estimated 68,210 of the 75,000 people under evacuation warnings have been notified that they are cleared to return home.

Elsewhere in the state, crews have continued to recover homes from two nearby blazes that burned across the state from the north to the south Tuesday. The Carr Fire in Shasta County burned across 13,004 acres and 43 structures, burning about 2,571 homes, private buildings and 600 vehicles.

In Mendocino County, the River Fire has burned 29,755 acres and 2,852 structures. About 100 residences were still under evacuation orders in Shasta County and officials were confident the Carr Fire would be fully contained Wednesday night.

Despite their heat, wind remains a problem for firefighting crews. The National Weather Service reported Wednesday that winds in the state will peak at 20-30 mph with gusts of up to 35 mph in the Mendocino and Lake counties. Firefighters are also worried about potential thunderstorms Wednesday.