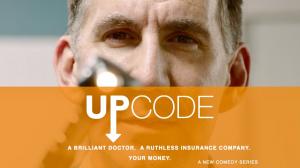 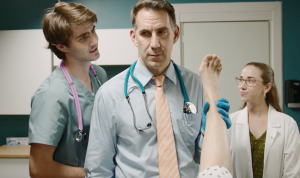 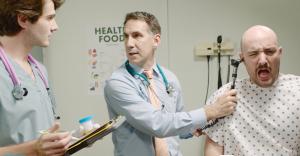 UPCODE centers around Dr. Fritz (Topitzer), a brilliant and by-the-book doctor forced to consider medical fraud in order to save his practice from being destroyed by a heartless insurance company. Dr. Fritz is forced to navigate insanely complicated billing rules in order to be paid by the callous insurance company, Amalgamated Health. With time running out, Dr. Fritz self-prescribes upcoding – in order to save his drowning practice, rescue his bumbling staff, and continue curing his ailing patients. “Upcoding” is when a doctor claims their patient has an overly complex diagnosis in order to get paid more. But, when this “playing the insurance game” results in potentially deadly side-effects and a State investigation, Dr. Fritz discovers his confidence and integrity could be lost forever.

Topitzer gained first-hand experience with the struggles medical providers face with insurance companies as a teenager, pitching in as a part-time billing clerk for his psychologist father, dealing with constant insurance payment delays and denials. Now years later, learning that half of all doctors want to leave the profession because of these issues, Topitzer created the series to shed light using laughter on our unjust system, adding “Upcode punches into a root cause of why the system is broken. Because doctors contort themselves to insurance companies’ rules in order to get paid, we end up in a situation where doctors are incentivized to over-diagnose, over-prescribe, spend less time, and over-bill us all as patients.”

Currently a New York City based actor, writer, and producer, Topitzer spent 18 years as an investment banker leading a double life. At night, he secretly performed improv and learned to write sketch, while by day he worked at one of the most intense and straight-laced jobs in the world. Five years ago, at the height of his banking career, he threw it all away to become a full-time actor and creator. Since then, he has performed in theatre, TV, film, and commercials, most recently acting in and producing the survival thriller feature film, Centigrade, released by IFC Midnight.