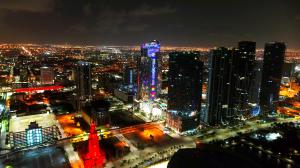 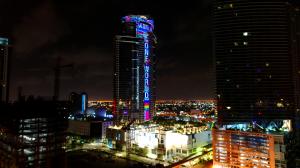 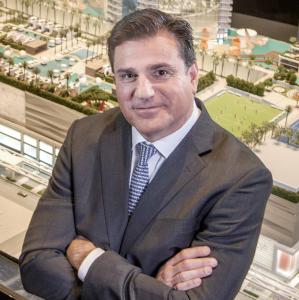 MIAMI, FL, UNITED STATES, July 15, 2021 /EINPresswire.com/ — As a sign of solidarity with the people of Cuba, starting tonight through Sunday night, downtown Miami’s 700-foot-tall Paramount Miami Worldcenter skyscraper will light-up the city’s skyline with the largest L.E.D. mosaic display of flags from around the globe and the musical message, “One World, One Prayer,” from Cuban-American musician Emilio Estefan.

“One World, One Prayer” is the title of the recently-released global unity anthem written and produced by Cuban immigrant and 19-time Grammy Award winner Emilio Estefan of Miami. It is performed by the world-famous Bob Marley and The Wailers reggae band.

Local radio stations are being asked to play the song every evening.

“The Paramount Miami tower is sending a signal to the world that Miami stands in solidarity with the people of Cuba in the quest for independence from an oppressive regime,” says Paramount Miami Worldcenter CEO-Developer Daniel Kodsi (Cod-See).

In 1967, at the age of 14, Estefan and his father, Emilio Sr., fled Cuba for Spain and then settled in Miami. Emilio Estefan founded the 1980’s Latino pop-music band, “The Miami Sound Machine.” He married the band’s star-singer, 7-time Grammy Award Winner Gloria Estefan, also a Cuban immigrant.

He says, “’One World, One Prayer’ is an anthem and a musical prayer for global peace, harmony and love and we are sending a shining signal from Miami to the people of Cuba that we support their quest for liberty.”

At the top of every hour; for two minutes; beginning at 5:00 a.m. until sunrise; and from sunset to midnight; the world’s tallest electronic animation lighting system will display moving images of flags representing 132 countries and an enormous ticker-tape-style L.E.D. read-out of the song’s title: “One World, One Prayer.”

Paramount, which is downtown Miami’s soaring signature skyscraper, will illuminate its 60-story-tall center column and its 150-foot-high by 300-foot-wide rooftop crown with a moving-medley of fluttering flags from five continents. Across the building’s 100-yard-long crown and through its middle are the scrolling lyrics, “One World, One Prayer.”

The tower lightings will continue through the night of Sunday, July 18, 2021.

Estefan says, it took him two-years to write, compose and complete the song.

The Paramount skyscraper rises from of the heart of the 27-acre, $4-billion Miami Worldcenter. It is the nation’s largest urban core construction project and America’s second-largest real estate development.
.
Bob Marley

Bob Marley was a reggae music Rastafarian icon best-known for his 1963 hit, “One Love, People Get Ready.” He and The Wailers recorded 15 albums. Marley was also a controversial proponent of the medicinal purposes of marijuana smoking. He died in May 1981 from melanoma cancer. If he was still alive, Marley would be 76 years-old.