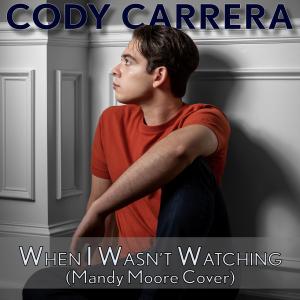 ATLANTA, GEORGIA, UNITED STATES, July 12, 2021 /EINPresswire.com/ — Listening to Cody Carrera’s music one wouldn’t automatically compare him to Mandy Moore, but according to Carrera, that couldn’t be further from the truth. He cites Moore, as well as a slew of eclectic female pop stars like Cher, Madonna, Björk, Britney Spears, Lady Gaga, Taylor Swift, Ariana Grande and Dua Lipa as inspirations.

“When I first heard “When I Wasn’t Watching” I was just blown away. The melody, the lyrics, the music video. Everything stayed with me. It was so simplistic, yet said so much. I just knew I had to put my spin on it. I wanted to thank Mandy and the writers for crafting such an incredible composition.” Carrera says.

In truth, the melancholic song fits right in with Carrera’s discography. Carrera who is also an actor and can be seen in episodes of “Glee”, “Lab Rats” and “Homicide Hunter” came right out of the gate with his music career releasing his first song “Your Sin”. With its shocking lyrics and even more shocking music video, it earned him “Best Music
Video” in 2018 at the Official Latino Short Film Festival and garnered an appearance on NBC. His most recent release “Get In Line” which shows him in a slaughterhouse, is a metaphor for the deterioration of dating in today’s technological world and was inspired by the novel and Scarlett Johansson film Under The Skin.

Listen to Cody’s newest release, a cover of Mandy Moore’s “When I Wasn’t Watching”: https://www.youtube.com/watch?v=rymr9dZzTuk

Cody Carrera was born in Plantation, Florida. At six years old, Cody and his family moved to the small town of Murphy, North Carolina. While in North Carolina, Cody attend Stagedoor Manor, a prestigious performing arts summer camp. Cody graduated with his high school diploma and Associates Degree. To pursue his interest in acting and performing he decided to move to New York City and attended an acting program. Cody then decided it was time for him to move out to LA to pursue his career. Cody first appeared in the “Glee” episode The Sue Sylvester Shuffle as the “Waterboy” on the field next to “Coach Beiste” in Season Two. He also appeared in a few other episodes of “Glee.” Cody then went on to appear in numerous other film and television projects.

Cody’s debut EP “Fire” was released in November 2017. “Fire” is a five song concept and visual EP with each song representing one or two of the Seven Deadly Sins and a Horoscope sign. It has themes of love, loss, death, depression, religion, self reflection and acceptance. Cody wrote all the songs on the EP. Each song has an accompanying music video, which makes a short film entitled “Here.” In October 2018 Cody’s Music Video for his first single “Your Sin” won “Best Music Video” at the Official Latino Short Film Festival. The same month he released his second EP entitled “The “Witch” Chronicles.” “The “Witch” Chronicles” is a three song DJ mix style EP with rock influences, but still contains Cody’s metaphorical writing style.