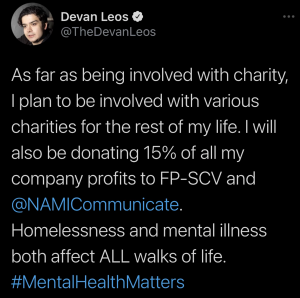 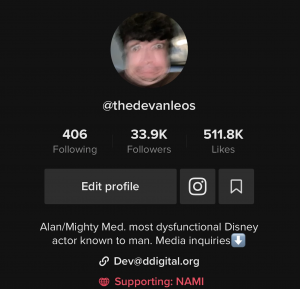 Disney Actor Devan Leos recently announced via Twitter that he is pledging lifelong service to charity as well as 15% of company profits.

Homelessness and mental illness both affect ALL walks of life.”
— Devan Leos

LOS ANGELES, CA, USA, April 18, 2021 /EINPresswire.com/ — Former Disney actor Devan Leos recently took to Twitter, stating he plans on being involved with the charity as a part of a life-long commitment. His tweet reads: “As far as being involved with charity, I plan to be involved with various charities for the rest of my life. I will also be donating 15% of all my company profits to FP-SCV and
@NAMICommunicate Homelessness and mental illness both affect ALL walks of life. #MentalHealthMatters”

Devan has recently been very vocal in various interviews and statements, highlighting his opinions on wealth, charity, and the digital marketing community. Devan Leos started acting when he was ten years old, appearing in films such as Madea’s Witness Protection and T.V. shows such as Austin and Ally and Mighty Med. Following a nearly five-year run with Disney, Devan found himself struggling and having various run-ins with law enforcement. However, since 2019, Devan has been searching for new ways to right his wrongs and help out charities such as Family Promise and NAMI (National Alliance on Mental Illness). Recently Devan has been very vocal, urging his followers to give to local and international charities, as well as the ones he has aligned with. While Devan regularly tweets on the subject of activism, he has also partnered his TikTok account (@TheDevanLeos) with NAMI, which has earned the charity multiple donations through his performance. Leos also recently incorporated a digital marketing company, and according to his recent statement, will be donating 15% of all their profits to Family-Promise SCV and NAMI.