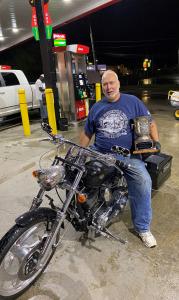 It was the least he could do for Hamme because of the dedication he has shown to the Rally.”
— Charlie St. Clair

LACONIA, NH, UNITED STATES, July 30, 2021 /EINPresswire.com/ — The 2021 Fritzie Baer trophy for above and beyond service to Laconia Motorcycle Week Motorcycle Rally has been awarded to Don Hamme of Erie, PA.

For the past fifteen years, Hamme has been a promoter of Motorcycle Week throughout the Western PA, Western New York and Eastern Ohio region giving talks, making calls and distributing the Rally News to motorcycle enthusiasts. Hamme is a tireless booster for the rally. At times, showing his dedication through acts such as meeting a train at 4:30am and lugging hundreds of pounds of magazines through the train station.

Recently, Charlie St. Clair, Executive of the Laconia Motorcycle Week Association, drove 1,000 miles round-trip to Erie, PA to surprise Hamme with the trophy as Hamme was unable to attend this year’s rally. St. Clair commented, “It was the least he could do for Hamme because of the dedication he has shown to the Rally.”

The Fritzie Baer Trophy was first awarded in 1996 and has been received by the likes of Governor John Lynch, Peter Makris of the Naswa Resort, Laconia Mayor Ed Engler and Laconia Police Chief Matt Canfield over the past 20 years, just to name a few. Fritzie Baer was a true booster for the Rally leading the Red Hat Brigade, a group of supporters who raised funds to put on the Rally. Baer was the lead charge for the Rally and is credited with bringing the AMA Road Champion Races to Laconia in 1938.