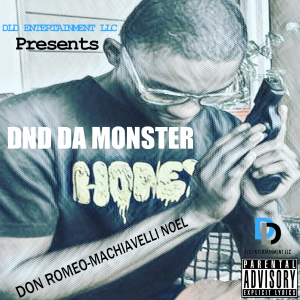 BROOKLYN, NY, UNITED STATES, December 16, 2020 /EINPresswire.com/ — With his professionally slick tone of voice and gritty lyrical imagery, Don Romeo-Machiavelli Noel has been solely focused on taking the throne in the Rap game since day one. After shocking the world with a savage set-list of deep collaborative cuts on the official release of his ultra-explicit debut record Rckstr in 2017, the man behind the m-i-c continued to sharpen his skills even further over the years to follow.

By dropping new singles online in 2020 like “Rooftop Vibezzz” and “Hokage” – the entire industry was instantly put on notice & reminded of the supreme talent Don Romeo-Machiavelli Noel brings to the bars – but he still had bigger plans in the works and much more in-store for the streets before the year was finished. Bringin’ the verbal heat to the superior beats on his latest joint “DND Da Monster” presented by DLD ENTERTAINMENT LLC, and produced by Amps Beats – Don Romeo ends 2020 with a massive new highlight in his catalog that gives listeners every reason to believe he’s destined to dominate the charts.

Listen to DND DA MONSTER on SPOTIFY
Flexing that X-factor finesse, Don Romeo-Machiavelli Noel can’t help but stand out from the rest – it’s in his nature. Whether taking an innovative approach to the bars with insightfully designed off-beat antics, or attached directly to the beat – “DND Da Monster” makes the most of his potential in every moment. Full proof that Don Romeo has the lyrical versatility capable of changing the game, and the confidence to say exactly what he wants to say, exactly how he wants to say it – his unfiltered & raw authenticity powerfully connects, and immediately confirms he was born to entertain. With undeniable talent that sets the standards for the rest to follow – “DND Da Monster” puts his rhythmic precision & intense charisma straight into the center of the spotlight for all to witness his greatness; his latest single simultaneously reveals how far he’s come already as an artist, and how committed he is to taking over.

Disrupted peace brings rampage December 23rd, 2020 – the NY rapper officially drops his brand-new cut worldwide online around the globe before the end of the year. Join Don Romeo-Machiavelli Noel as he takes “DND Da Monster” straight to the top of the charts & playlists, where his music rightfully belongs.
Follow Don Romeo on Twitter
Follow Don Romeo on Instagram
Please contact rubennoel6@gmail.com for interviews, and further info.