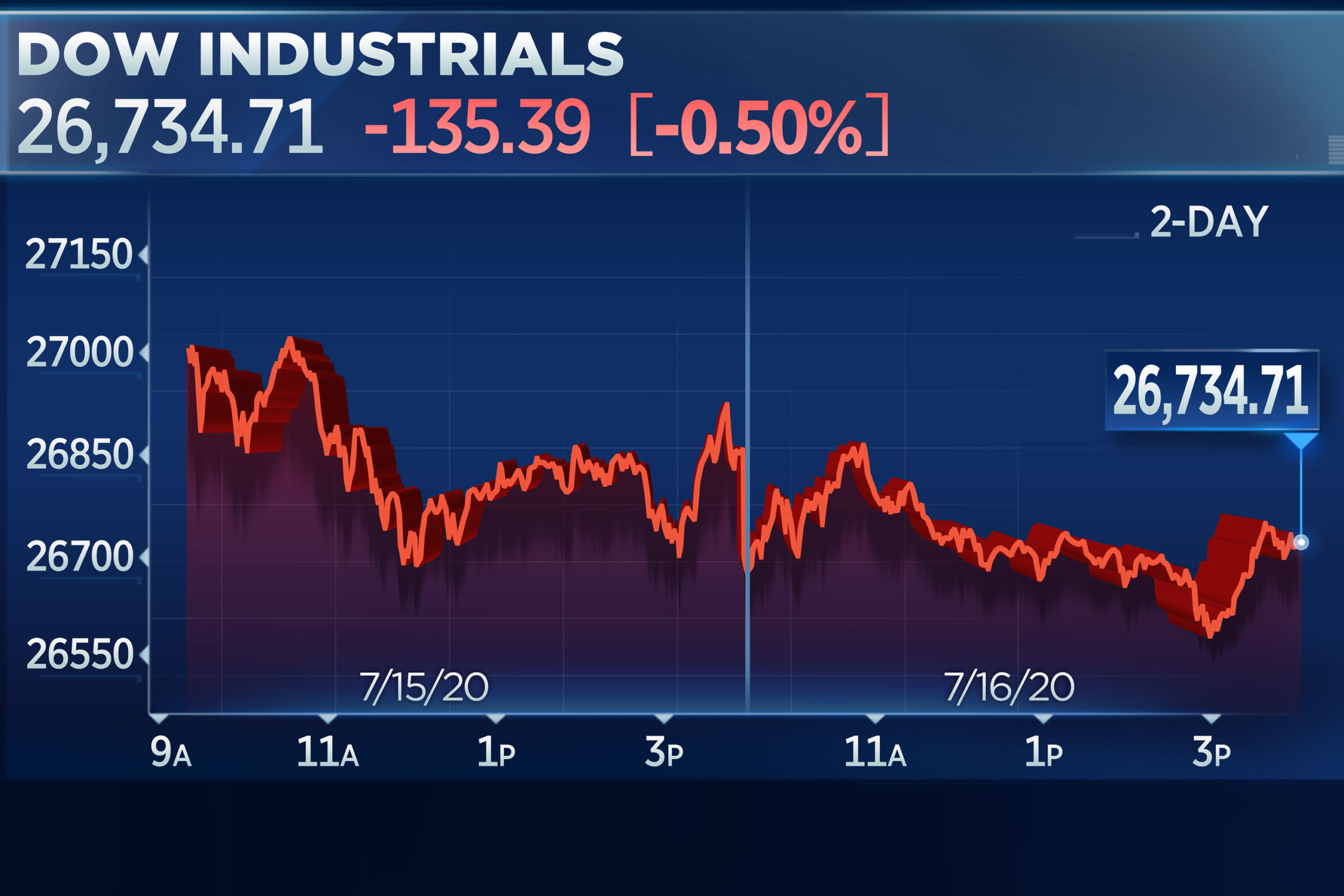 Dow futures were down more than 100 points after Microsoft fell more than 2 percent in premarket trading.

Futures were off by about 35 points to leave the S&P 500 down about 6 points and the Nasdaq down 10 points.

Yesterday’s losses brought the S&P 500 and Nasdaq back down to near their 50-day moving averages.

Investors weren’t taking the main volume news as particularly positive; the US was meant to finalize new tariffs on Chinese imports, which could come at any time.

The Dow Jones Industrial Average on Wednesday fell more than 100 points, snapping a four-day winning streak, as trading appeared to be shaken by worse-than-expected data on prices and retail sales.

The S&P 500 and Nasdaq were down by about 25 points each, leaving them within striking distance of their 50-day moving averages.

Dow futures were down more than 100 points after Microsoft fell more than 2 percent in premarket trading.

Futures were off by about 35 points to leave the S&P 500 down about 6 points and the Nasdaq down 10 points.

Yesterday’s losses brought the S&P 500 and Nasdaq back down to near their 50-day moving averages.

The better-than-expected data on retail sales and prices fueled optimism that inflation is beginning to slow but rather than fade, investors are worrying that President Donald Trump will increase tariffs to head off rising prices.

The president has hinted that he will impose tariffs on $200 billion of Chinese imports, a figure that Congress would have to agree to.

Dow Jones industrial average shares were down by more than 100 points in premarket trading.

The NASDAQ Composite dipped by about 26 points, putting it within 70 points of its 50-day moving average. The benchmark is down more than 4 percent from its record high set in January.

The S&P 500 dropped by about 25 points in premarket trading.

The stock market did some rock-hard climbing until late February. That’s when the Federal Reserve raised interest rates and signaled a slowdown in future hikes, a factor that fed into fears that growth was about to slow.

“We’re on record as being worried about the broader trend for growth,” ConvergEx Group chief market strategist Nicholas Colas said yesterday. “The market has rallied most of the year on the assumption that the economic expansion is poised to continue. Any disappointing GDP report would be seen as a big negative for stocks.”

The devil will be in the details on tariffs, he added. “Some markets seem to be holding up relatively well. That’s to be expected, and you can see a relief rally in stock prices. But the real testing will be if there’s talk of retaliation.”

Later today, the Federal Reserve releases minutes from its May 29-30 meeting, which covered various topics, including the economic outlook.

“Expect the minutes to be very interesting,” Colas said. “The most important question is, what impact has the trade war impacted financial markets? … Will the pace of Fed rate hikes slow because of slowing inflation? … And what’s the fear going forward? Is the Fed on course for more or less aggressive policy?”