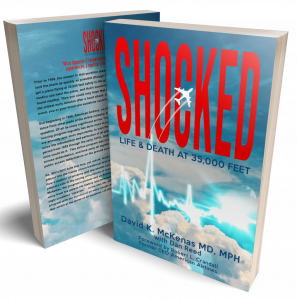 This book brought back all the pride and enthusiasm we experienced during this time in American Airlines’s history.”
— Kathy Lord-Jones

DALLAS, TEXAS, USA, June 10, 2021 /EINPresswire.com/ — Former Corporate Medical Director for American Airlines Dr. David McKenas is set to release his long-anticipated book alongside award-winning business and financial journalist Dan Reed. “SHOCKED: Life and Death at 35,000 Feet” is the story of how McKenas interacted with the corporate world and government bureaucracy to pave the way for the life-saving onboard defibrillator program.

Part historical narrative and part memoir, “SHOCKED” tells the true but still untold story of how in 1998, life-saving defibrillators, commonplace to medical professionals on the ground, were placed into the hands of flight attendants.

SHOCKED also tells of the very first dramatic ‘resurrection’ of a passenger in 1998 on a flight leaving for Mexico, just days after the defibrillator was first placed on the plane. Mr. Robert Giggey, and his flight attendant rescuer, Shawn Lynn, were both ‘reborn’ that day. One was given new physical life, and the other, peace, direction and a renewed courage to live.

As a renowned aerospace medicine specialist and corporate medical director for the largest airline in the world, Dr. David McKenas became responsible for the health and safety of the millions of passengers who fly each year. SHOCKED tells how he became the pioneer of the defibrillator program. An entire lifetime of seemingly unrelated unusual events, or yes, “miracles” – in his own life, and in the lives of others – ultimately led to the survival of many people who experienced cardiac arrest at the worst of all possible locations – 35,000 feet.

“SHOCKED: Life and Death at 35,000 Feet” is available in digital and print formats.

Dr. McKenas is a board-certified specialist in both Aerospace Medicine and Occupational Medicine. He served as Corporate Medical Director for American Airlines from 1992 to 2002, a period that included the final years at the helm of legendary American CEO Robert Crandall. In his early years, Dr. McKenas was a near musical prodigy who studied music composition, piano and voice, and who performed in a professional choir and as a piano soloist and accompanist as a child. He minored in college in music but earned his undergraduate degree in biochemistry before studying medicine at SUNY Upstate Medical Center and the Harvard University School of Public Health in Boston, MA.

As an Air Force Officer, Dr. McKenas became a board-certified specialist in the unique field of Aerospace Medicine. He served as the lead aerospace medicine doctor in the Department of Defense’s Manager Space Transportation System Contingency Support [DDMS] program at Cape Canaveral, Florida, where he coordinated world-wide emergency care for NASA’s Astronauts in the event of a space shuttle catastrophe. As an aerospace medicine flight surgeon, Dr. McKenas also received full flight training, up to the point of soloing on a T-37 jet airplane. Upon leaving the Air Force in 2002, Dr. McKenas joined American Airlines, first as a staff physician then, shortly thereafter Corporate Medical Director. He is one of the world’s leading experts in Aviation and Aerospace Medicine. Today he practices medicine part time with the Carrollton, TX, Fire Department, where he makes sure firefighters are medically safe to perform their strenuous work, and screens for illnesses such as cancer that can harm firefighters. He composes music and is involved in various church-related mission efforts around the globe.

Dan Reed is a veteran, award-winning business and financial journalist who has covered the airline industry more than 35 years, first for the Fort Worth Star-Telegram, then for USA TODAY and now for FORBES.com. Of the half-dozen books he has authored or co-authored three, including this one, are on airlines-related subjects.

In addition to writing, Dan works as a communications consultant advising and providing communications services to corporations, nonprofits, government entities and individuals. A graduate of the University of Arkansas and of Southwestern Baptist Theological Seminary, Dan is a deeply involved churchman and has taught and mentored high school boys for three decades. He and his wife Janet have three married sons and five grandchildren, plus a huge but gentle Labrador Retriever named Bella. They live in Fort Worth, TX.