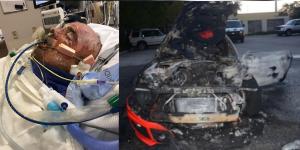 Hetsler was burned over 70% of his body, lost both hands, and right ear. He has since made a comeback and looks to share his story to give others hope.

JACKSONVILLE, FL, UNITED STATES, July 6, 2021 /EINPresswire.com/ — A self-made Florida entrepreneurs’ life has been forever changed after a fiery malfunction sent his health and businesses up in smoke. Robert Hetsler Jr., who lives in Jacksonville, has been left with horrific burns on over 70% of his body and a long road to recovery after his modified Ford Roush Mustang exploded, while idling, in November of 2017.

The newly purchased Roush Ford Mustang was a gift to one of his younger employees who Hetsler described as a hard worker with great potential. With the employee unable to afford such a vehicle, Hetsler purchased the Mustang so that the young man could acquire the vehicle of his dreams with no interest- just minor contributions from his salary. In addition, he was allowed to live with Hetsler at his personal residence, where his family also resided. These were just a few of the many gestures Hetsler is known for, as he has expressed his belief in paying it forward.

Hetsler kept the vehicle at his home. Taking the car out for a break from his busy life at home, Hetsler went for a drive in the Roush Ford Mustang. Despite getting a reprieve by way of a cruise through town, Hetsler stopped in a bank parking lot to rest for a moment.

Suddenly, the Roush Mustang inexplicably malfunctioned and was instantly engulfed in flames.
In the blink of an eye, Hetsler was covered in third and fourth degree burns while choking on toxic smoke. Both of his hands and right ear were ultimately amputated. A subsequent arson and homicide investigation would reveal no foul play and that the fire was spontaneous and quick burning in nature, effectively giving Hetsler no time to escape.

His life forever changed, Hetsler was put into a medically induced coma for 8 months despite
having less than a three percent chance of survival.

Upon coming out of his coma and an 18-month hospital stay, Hetsler returned to a vastly different world. His home was looted, destroyed, and filled with squatters, his assets had vanished, and his clients were suing him for being unable to access their investment proceeds.

While Hetsler admits that he should have come up with more robust contingency plans, he was
in no way prepared for the smearing he would receive by way of local media and the cold
shoulder he would get from Ford, Roush, and World Imports.

Spending more than two years in a wheelchair, Hetsler used the power of his mind, hypno-therapy, and sheer willpower to defy doctors’ assertions that he would never walk again. Empowered by the thought of leaving his children fatherless, Hetsler has defied all odds and is walking. Hetsler was quoted as saying, that “My children need me, and I need them” as being a primary source of motivation. Despite all the setbacks, Hetsler has found new meaning in his second chance at life.

Hetsler is an avid listener of Tony Robbins, who refers to amputees like Hetsler as “Spiritual Warriors”, and has been inspired by Mr. Robbins’ teachings. Hetsler is dedicating his life to inspiring people and has signed a book deal to be released in 40,000 locations globally this fall while also co-producing a 9-part Amazon docuseries currently in production all designed to inspire and motivate around the world.

Hetsler looks to begin a nationwide speaking tour in hopes that his tragedy can be a source of strength and hope for others to draw upon. In a time where hope seems to be more of a punchline than a tangible virtue, Hetsler is rising from the ashes, determined to ensure that others do not sink into the abyss of depression and hopelessness that he experienced. More information can be found on Hetslers’ Facebook, LinkedIn, and Twitter pages.