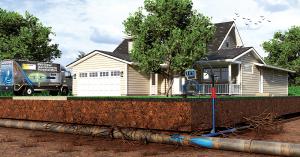 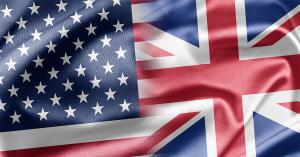 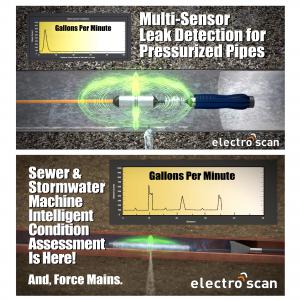 All leaks are located and measured in Gallons per Minute or Liters per Second, without relying on ‘seeing’ or ‘hearing’ defects at Joints, Customer Tap Locations, or Pipe Walls. 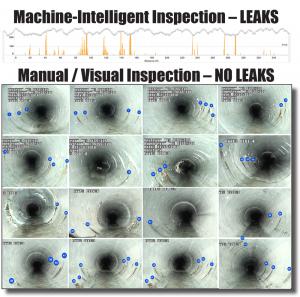 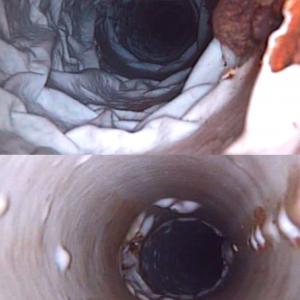 Traditionally relying on Acoustic sensors to listen for leaks when pipes are full or Closed-Circuit Television (CCTV) cameras to see leaks when pipes are empty, Electro Scan’s machine-intelligent multi-sensor suite of in-pipe sensors provides unambiguous, unbiased, and unprecedented accuracy to certify pipes as watertight, regardless of pipe flow or pressure.

Water & sewer administrators and owners have long acknowledged the limitations of legacy technologies to accurately test pipes, especially for leaks and water tightness.

Most recently, artificial intelligence has been introduced to electronically hear acoustic vibrations & view frame-by-frame cctv videos to overcome subjective manual assessments. But, detailed analysis has simply confirmed the limitations of both acoustic or visual inspections to document or measure leaks.

Unfortunately, acoustic devices and cameras tend to miss 80-100% of leaks.

Acoustic devices are prone to false-positive readings due to customer usage, street noises, pipe flows, and water pressure. In contrast, visual-based CCTV cameras can’t tell if a crack goes through a pipe wall or if a joint allows water to flow past its bell or spigot.

As a result, many rehabilitation and renewal plans may be based on inaccurate or incomplete assessments causing multiple repairs to the same pipe and unplanned customer service interruptions.

Earlier this year, Electro Scan Inc was awarded ‘2021 Product of the Year‘ by Environment + Energy Leader and ‘Leak Detection Solution of the Year for 2021’ by IoT Breakthrough.

“Electro Scan technology is a game-changer since it uses low voltage electric current [equivalent to six AA batteries] to test 360-degrees of a pipe’s wall and connections to see if it leaks electricity,” stated Hansen.

Scientific principles confirm that if a pipe leaks electricity it leaks water which can measured and expressed in Gallons per Minute (GPM) or Litres per Second (LPS).

Contracts in the U.S. will have Electro Scan assess newly installed plastic pipe for one of the largest water utilities in Texas, and inspect recently relined pipes in Florida and Wisconsin where steam cured resin-based CIPP was installed. CCTV cameras were previously used but unable to certify pipes as watertight.

New contracts in the United Kingdom will have Electro Scan assess recently relined CIPP pipes and also assess existing pipes to determine risk of flooding or overflows that could contaminate British waterways.

CIPP lining to rehabilitate sewer & water pipes was first introduced in England in 1971 by Eric Wood who called the CIPP process insitu form, derived from the Latin meaning “form in place.”

As a trenchless technology, CIPP does not require excavation to rehabilitate a pipeline that is either leaking or structurally unsound.

In the past, companies have attempted to embed fiber optic cables throughout CIPP liners to ensure that heat is evenly distributed during the curing process.

Cities and water utilities had previously relied on CCTV cameras to help locate sources of sewer backups, sanitary sewer overflows, and flooding, but recent post-rehabilitation studies have found that inspecting pipes with cameras only when a pipe is dry may be a major impediment to correctly allocating capital expenditures.

In contrast, the Electro Scan process inspects pipes when they are either full, as in the case for pressurized water mains, or simulates a fully surcharged sewer to allow its electric current to seek out any location where a pipe leaks. Having less than 1 inch locational accuracy, but providing utilities with each defect’s severity in GPM or LPS, capital expenditures can be targeted with pinpoint accuracy.

Hansen, a pioneer in water & sewer condition assessment since 1980, is not limiting his work to US and UK markets.

Already working in the Middle East, Hansen is scheduled to speak later this year at the in-person No-Dig Down Under annual conference in Sydney, Australia, where he will present results from CIPP testing at one of Australia’s largest water utilities.

Electro Scan Inc. has also sold its first commercial unit to Singapore, shipping later this month, where its portable unit will be used for inspecting existing and rehabilitated pipes.