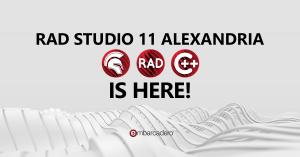 RAD Studio 11 introduces a number of important new features and enhancements that improve the user experience of the IDE and boost developer productivity.

New features on top of a stable foundation are paramount for future growth and longevity. This new release is a worthy upgrade!”
— Jarrod Davis of tinyBigGAMES

AUSTIN, TEXAS, US, September 9, 2021 /EINPresswire.com/ — Embarcadero Technologies has announced the General Availability of RAD Studio 11 Alexandria, including Delphi 11 and C++Builder 11.

RAD Studio 11 Alexandria introduces a number of important new features and enhancements that improve the user experience of the IDE and boost developer productivity, including support for high-DPI 4k+ screens, new Windows features in the VCL along with design-time preview of VCL styles, a new welcome page, a C++ formatter and enhanced cross-language support between Delphi and C++, enhanced FMX designers, a macOS ARM64 native compiler for Delphi, and Edge browser support for FMX on Windows.

Importantly, RAD Studio Delphi apps can already be provisioned for Windows 11. Embarcadero MVP Richard Barker noted that “The new app store, like its predecessor, uses the MSIX installation package format. The good news is RAD Studio can package your apps as MSIX bundles so it’s full steam ahead for us RAD Studio users.”

In the runup to the RAD Studio 11 release, the beta version has been well received. Developers using RAD Studio 11 can use VCL Styles at design time, seeing in real time how styles will impact the UI and designing forms even faster. Holger Flick of FlixEngineering insists, “Delphi and its VCL are the best for Windows desktop development, and it got better yet again! RAD got even better with the new WYSIWYG feature improvements for the form designer.”

Support for the Newest Technologies

Roman Kassebaum of IRK points out that “With RAD Studio 11 it is possible to compile binaries for macOS ARM. Since the new M1 processor is incredibly fast it is more than important to create native apps for it. That’s why RAD Studio 11 is a must-have for every Delphi developer!”

Another important new feature of RAD Studio 11 is support for high-DPI screens, enabling developers to use the IDE on high-DPI and 4k monitors. Embarcadero Chief Developer, Advocate, and Engineer Jim McKeeth notes, “Now the RAD Studio 11 IDE looks as good as the applications it builds with full high-DPI support.”

RAD Studio 11 Alexandria also comes with enhanced remote desktop support, facilitating collaboration and efficient product development for remote teams. RAD Studio 11 has also undergone quality updates in key areas that involve fixes for over 650 of the most commonly reported issues and over 110 new features requested by customers on the Quality Portal.

Jarrod Davis of tinyBigGAMES says, “New features on top of a stable foundation are paramount for future growth and longevity. This new release is a worthy upgrade!”

How to Find Out More

Embarcadero builds tools that solve productivity problems for application developers. The company’s products allow users to design, build, and run applications from a single code base across all platforms. Ninety of the Fortune 100 companies and a community of more than three million C++ and Delphi users worldwide rely on Embarcadero’s award-winning products to deliver critical enterprise applications. Embarcadero is a division of Idera, Inc. To learn more, visit www.embarcadero.com