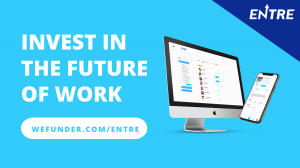 As a new LinkedIn alternative, Entre chooses Equity Crowdfunding instead of raising money from Venture Capitalists

PITTSBURGH, PENNSYLVANIA, UNITED STATES, January 19, 2021 /EINPresswire.com/ — Entre, one of the most supportive and inclusive social media platforms for entrepreneurs, investors, and freelancers, has quickly reached a major fundraising milestone. Entre currently stands at over $60,000 raised through its equity crowdfunding campaign on WeFunder. This milestone helps solidify Entre’s position in scaling its platform, while making entrepreneurship accessible to anyone.

“We chose to raise money through equity crowdfunding so that our early users can have equity in the platform they are helping create,” said Michael Marra, CEO and Founder of Entre. This direct relationship with investors has provided Entre the ability to raise money from almost 100 early supporters from some of its 20,000 current users.

One of the Investors in Entre, Brandon Andrews, who’s also an Entrepreneur himself and a Casting Director for Shark Tank said, “Entre is being built for and by entrepreneurs, with a single focus – delivering value for the community. As the community scales network effects will increase the value for members and the value of the community itself.”.

Based in Pittsburgh, Pennsylvania, Entre launched in 2019 and has already raised over $250,000 in total. They are actively raising more money through their partnership with Wefunder and will be looking to start their Seed Round in early 2021. Now that the Entre App is officially launched, they are focused on scaling and building the largest social network for entrepreneurs of all types to help them connect, grow and prosper in the digital world. To join the fastest growing network of entrepreneurs, visit www.joinentre.com