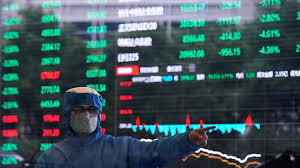 International stock markets fell to a near three-month low on Wednesday as fears over an ongoing “Hong Kong flu” outbreak prompted investors to shun Asia, Europe and the United States.

A source within Hong Kong’s health department told the South China Morning Post that both pupils and teachers in six schools had tested positive for the Middle East Respiratory Syndrome (MERS) coronavirus.

But authorities said the disease was not spreading beyond the kindergarten that was first infected last week.

The news comes the same day the World Health Organization said a second person has died in Hong Kong of the virus, which has also infected seven others.

Investors seemed reluctant to take on new risk ahead of the release of the latest US inflation figures on Wednesday, amid concerns that they could rebound from their recent two-year low.

“This issue [Hong Kong flu] is clearly negative for all stocks at the moment and has added fuel to worries that the U.S. Fed will signal it’s preparing to tighten more than anticipated,” said Michael Hewson, chief market analyst at CMC Markets UK.

The FTSE 100 was down 0.25% at 6,884 points, as it has lost ground for the past two days after a flurry of bullish sentiment over Brexit and a stronger pound in the past week.

A number of brokers cut the odds on a Bank of England rate rise as inflation data was out. The five-year swap rate, the market’s expectation for Bank of England borrowing costs, also dropped from 6.05% to 5.84%.

Figures released on Tuesday showed that the cost of living in the United Kingdom rose to its highest level in more than three years last month as the pound took a hit after May’s general election.

Ethan Harris, co-head of global economics research at Bank of America Merrill Lynch, said the Fed may have to raise rates four times this year, double the forecast it made in December.

“We expect a four-quarter [rate hike] to be announced in June. I would expect it would raise both on July 31 and on September 26,” Harris said.

The Spanish IBEX was also down 0.43% at 10,448 points as its largest index of companies were hit by news that Airbus had announced 2,400 job cuts in Germany and France.

Meanwhile, in mainland China, the Shanghai Composite and Shenzhen Composite Index each fell 0.32% to 4,799.75 points and 2,549.15 points, respectively.