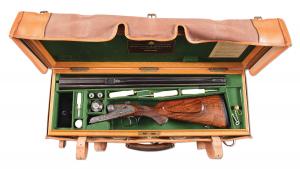 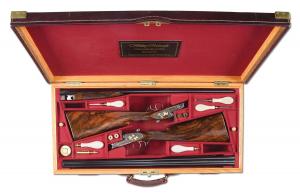 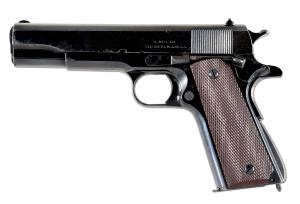 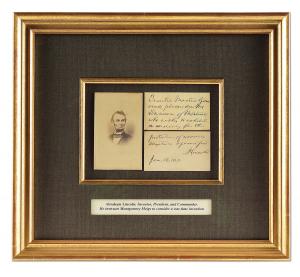 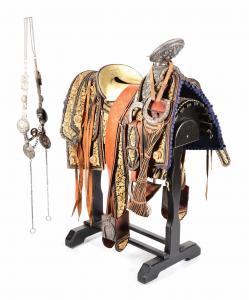 The 2019 Krieghoff Gun of the Year with magnificent engraving by Hendrik Fruhauf is known as the Abraham Lincoln Gun because its decorations illustrate the highlights and legacy of our 16th president.”
— Dan Morphy, Founder and President of Morphy Auctions

DENVER, PA., UNITED STATES, April 7, 2021 /EINPresswire.com/ — Expertly curated to the highest standard, the selection awaiting bidders at Morphy’s April 27-30 Extraordinary Firearms & Militaria Auction is a diverse offering that includes military and civilian productions rarely seen in the collector marketplace. Nearly 2,000 lots will be presented at Morphy’s gallery over the four days, amply covering such categories as NFA Weapons, Antique and Modern Rifles & Shotguns; Antique and Modern Handguns; Militaria, Swords, Knives, Civil War Firearms & Lincoln Memorabilia; and Fishing Lures & Accessories. For those who cannot attend in person, all remote forms of bidding will be available, including live via the Internet through Morphy Live.

One of the top highlights of the sale is a Holland & Holland (London) Royal Double Rifle built in 1932 and chambered in a classic .577 Nitro Express caliber for hunting dangerous African game. This historical firearm was once owned by Swedish-born nobleman Baron Bror von Blixen-Finecke (1886-1946). A professional big-game hunter who spent most of his life Africa, von Blixen-Finecke guided many royals and other notables on expeditions, including HRH The Prince of Wales, Sir Winston Churchill, Ernest Hemingway, and members of the Vanderbilt family. Cased with accessories, this outstanding rifle with von Blixen-Finecke provenance has an auction estimate of $160,000-$200,000.

The Larry and Brenda Potterfield family – acclaimed for their longtime support of the National Rifle Association (NRA), fish and wildlife stewardship, and organizations related to youth sport-shooting activities – has consigned 11 superb shotguns made by Westley Richards & Co. (England), with instructions to disburse 100% of the hammer proceeds to the NRA Whittington Center. Within this elite grouping is a cased pair of bespoke circa-1993 deluxe-grade sidelock side-by-side game shotguns, gold-inlaid and engraved by master engraver Allan Brown, and estimated at $80,000-$100,000. The estimate for the total collection is $257,000-$347,000.

A cased K-80 12-bore over-under shotgun that was named the 2019 Krieghoff “Gun of the Year” is a special exhibition-grade firearm with magnificent engraving by the renowned master engraver Hendrik Fruhauf. It is known as the “Abraham Lincoln Gun” because its exquisite engravings illustrate the highlights and monumental legacy of America’s 16th president. A one-of-a-kind gun, it comes to auction with a $65,000-$85,000 estimate.

In the Military Firearms category, there are scores of premium-quality entries, but two lots, in particular, stand out as superstars. First, there’s an exceedingly scarce and desirable Colt/Armalite AR-15 Model 01 machine gun that fires .223 Remington-caliber ammunition. An early and unaltered precursor to the iconic M16 machine gun, it is fully transferable, contingent upon BATF approval prior to conveyance. Estimate $40,000-$80,000. The other high-flier of the group is a rare, original-finish Singer Manufacturing Co., 1911A1 military pistol, .45 ACP and one of only 500 made in 1941 under Educational Order W-ORD-396. With perfect manual mechanics and all of the correct markings, this model is highly sought after by collectors of US military arms, but examples are seldom available to purchase. Estimate: $80,000-$125,000

Day 4 of the auction shines a spotlight on militaria, including letters, appointments and other documents signed by US presidents and military officers. Among the Civil War relics is an archivally framed and matted two-part note handwritten by Abraham Lincoln and dated January 11, 1865. The note is addressed to Quartermaster General Montgomery Meigs and asks the recipient to “see Mr. Duncan, of Montreal, who wishes to exhibit a discovery for the protection of wooden structures against fire.” Presented together with a formal photo of Lincoln, the stately ensemble is estimated at $6,000-$8,000.

A Civil War-era 34-star American Flag, exemplifying the version that became the official US flag on July 4, 1861 after Kansas joined the Union, measures 18 feet on the fly and 9 feet on the hoist. It is marked “Revenue Cutter City of Detroit,” referencing the naval service formed in 1790 that eventually merged with the US Life-Saving Service to form the United States Coast Guard. Estimate $4,000-$6,000

The four-day auction is a browser’s delight because of its broad variety and the sheer number of subcategories, ranging from a collection of salt-water lures on Day 2 to a late-19th-century Mexican silver charro saddle to be offered near the end of Day 4. The saddle (with bridle) was made by Fernando Perez of Mexico City and is of a type used by the highly skilled mounted performers in Mexican rodeos. Beautifully ornate and in superlative condition, it could ride off into the sunset for $5,000-$8,000.

Morphy’s April 27-30 auction series consists of an April 27 Extraordinary Firearms session, an April 28 offering of saltwater fishing lures and militaria; an April 29 session of Field & Range Firearms, and a closing session on April 30 that features a comprehensive selection of rare, high-quality militaria. The auction will be held live at Morphy’s gallery in Denver (Lancaster County), Pa., starting each day at 10 a.m. ET. All remote forms of bidding will also be available, including live via the Internet through Morphy Live. Two printed catalogs are available to order: one is exclusively for Day 1, and the second incorporates Days 2-4. Alternatively, all items may be viewed online, with detailed descriptions and multiple images per lot, at www.morphyauctions.com. Questions: call 877-968-8880 or email info@morphyauctions.com.