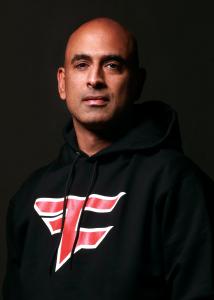 LOS ANGELES, CALIFORNIA, UNITED STATES, February 18, 2021 /EINPresswire.com/ — LOS ANGELES (February 18, 2021) – FaZe Clan, the world’s most prominent gaming organization, announced today that Amit Bajaj recently joined the company as its new Chief Financial Officer on the heels of a successful 2020 anchored by tremendous growth. Bajaj will oversee finance, strategy and corporate development at FaZe Clan, as well as collaborate with the rest of the leadership team to expand growth opportunities for the business.

Bajaj brings deep experience in corporate finance and strategy to FaZe Clan. Most recently, he was Chief Executive Officer at BIG3, a 3-on-3 professional basketball league featuring all-stars, hall of famers and world champions. Previously, Bajaj led a successful career as an investment banker for over 20 years, including serving as a partner at Centerview Partners providing advice and counsel to prominent media and technology companies. Prior to Centerview Partners, Bajaj was a senior member of the investment banking practices at Bank of America Merrill Lynch and Bear, Stearns & Co. Inc. Throughout his career, he has assisted companies, management teams, boards of directors and investors on a range of advisory and financing assignments whose aggregate value exceeded $100 billion.

“As we look ahead, Amit’s finance experience and his ability to think strategically will be instrumental to FaZe Clan’s growth,” said FaZe Clan CEO Lee Trink. “He’s highly regarded and has played a pivotal role advising prolific companies and management teams in periods of transformation. We’re thrilled to welcome Amit where his diverse background, collaborative nature and deep experience will help drive our continued mission.”

Bajaj said, “I’m excited to join the team at such a significant time for the company and the industry at large. FaZe Clan has evolved from an esports organization to a true global media and lifestyle brand with tremendous potential. I’m looking forward to partnering with Lee and the team to execute on the vision and grow the business.”

About FaZe Clan:
Since its inception in 2010, FaZe Clan has established itself as the world’s most prominent and influential gaming organization known for its disruptive original content and hyper-engaged global fanbase of 230 million combined across all social platforms. FaZe Clan holds an unrivalled position at the epicenter of gaming, sports, culture and entertainment, driving how the next generation consumes content, plays and shops. Their roster of 85 influential personalities consists of world-class gamers, engaging content creators and a mix of talent beyond the world of gaming, including NBA star Ben Simmons, Lebron “Bronny” James Jr and Lil Yachty. The organization’s unmatched esports division includes seven competitive teams in Fortnite, FIFA, PUBG, PUBG Mobile, Rainbow Six, Call of Duty League (Atlanta FaZe) and CS:GO with dozens of world championship trophies among them. In addition, FaZe Clan has become a sought-after fashion and lifestyle brand through an inspired apparel line and limited-edition collaborations with partners including Champion, NFL, Manchester City FC, Lyrical Lemonade, Kappa, CLOT, LA Kings, and more. Follow us @FaZeClan, @FaZeApparel and @FaZeUpdate.