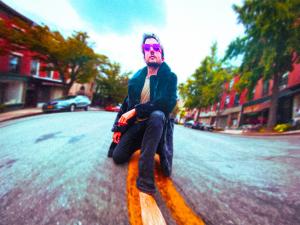 Frank Cogliano’s debut EP ‘CRT’ will be available on all streaming platforms on September 17th, 2021.

BROOKLYN, NEW YORK, UNITED STATES, September 22, 2021 /EINPresswire.com/ — Meditative, dreamlike, and undeniably original – Frank Cogliano’s dazzling debut EP ‘CRT’ is a trip into another dimension – the perfect hit of future-nostalgia we didn’t know we needed.
Sounding like you tuned in to a radio station from the 1970s in a David Lynch movie, Frank is a master of creating the soundtrack to the subconsious. Using vintage instruments and retro-glitchified tech, he creates a universe that sounds simultaneously familiar and as if it were made by aliens in the future.

Featuring lead single ‘Peace 2’ (already featured on dozens of Spotify playlists), each track was written in a dream Frank had. He woke up in the morning and recorded his recollection on analog tape before he forgot, and then took the warbled lo-fi material and transformed it into music that is both breathtaking and celestially chill — a rare gift that the artist is becoming well known for.

Frank Cogliano’s music has been featured in hundreds of TV shows and films. From Mortal Kombat to Marco Polo, his work as a session guitarist has been featured in multiple pop culture scores. Now he has taken the opportinuty, uninhibited, to create a score for a film that doesn’t yet exist. Having been the guitarist for internationally acclaimed R&B group, Sugarbad, ‘CRT’ now marks Frank’s first solo release.

Recorded, produced and mixed in Brooklyn, New York by Cogliano himself, Frank also plays every instrument on the album, and even re-purposed some old tech to invent his own. His obsession with analog gear led him to use his tascam portastudio in unique ways, and even using the EP’s namesake Sony Trinitron Cathode Ray Tube (CRT) TV to produce some of the unusual sonic textures snaking their way around your brain. His iconoclast approach to music production adds to the deliciously hazy, nostalgic summer drip on every track.

Frank Cogliano is a composer and producer based in Brooklyn, New York. He began creating multitrack experiments on tape from the age of ten, and since then has proven himself to be a master of sonic manipulation. He main focus is blending stringed instruments including guitars, pedal steel guitar, a custom-built guitarviol, saz and oud with a vast collection of analog gear and unusual synthesizers to create a unique blend that is instantly recognizable. His music has been featured on hundreds of TV and film productions. Formerly the guitarist in internationally acclaimed R&B supergroup Sugarbad, he is now striking out on his own as a solo artist with his upcoming debut EP “CRT”.