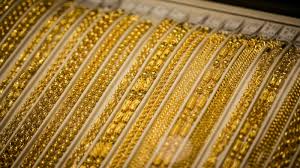 And this week’s U.S. trade deal is a blueprint for much-needed economic retrenchment — new tariffs on steel and aluminum are a big blow to foreign production, but once they’re in place, they may be phased out. All that said, I remain deeply concerned about the potential for economic and political instability in the post-Brexit UK — how would even two hard years of negotiations play out? — as well as the instability and unpredictability of some high-stakes trade negotiations in China.

Still, I like gold, and a lot of gold, which can help you protect your wealth and your well-being.

A bullish note from Goldman Sachs appears to have triggered a price surge Thursday and early Friday. And while Goldman itself acknowledges that central banks may return to negative interest rates, at least in Japan and the euro zone, I suspect that central banks, at least in the near future, will not engage in another round of quantitative easing, or QE, which not only boosts paper money but also, by making them zero-yielding and forever more attractive, undermines faith in what it is they’re doing. So why not drop the gold?

That would be a mistake

The simplest argument against investing in gold is that it’s not a practical thing to do. I’ve known people who talk about gold but don’t actually own it — they say they would invest in it if it would just become more attractive. I admit it’s easy to come up with excuses for not owning gold — would it pay? Would I sell out of it for less than I bought it? — but if your concerns are somewhat more concrete, and your reasons for not owning gold are comprehensible, then you ought to consider the pros and cons of investing in it. Of course, it’s not exactly easy to examine all the pros and cons, or even to determine the right opinion, if you’re one of those people who just says that you would buy gold but don’t actually own it — you decide you’ll buy a mattress instead.

There’s a more serious problem with being a gold skeptic. Gold bears, by definition, prefer financial chaos and economic crisis to stability, good times and rising prosperity. A gold-loving prospective investor, by contrast, is basically happy with either of those outcomes. Those who like gold also tend to respond badly to even the whiff of a crisis, even if it lasts just a few weeks. One of the main stories out of Europe this week was about the massive sell-off of gold, as worried investors dumped their holdings in case the continent finally experienced another downturn. So while most of the talk of gold bulls right now centers on the gold price, it’s possible that the rising price may also be an illustration of how financial uncertainty is driving gold into deeper decline.

Still, I continue to believe that the dynamics driving gold are much stronger than the usual anti-authoritarian bad guys-good-people who sometimes play with money stories. The frequent calls for a growing world trade war only make gold more attractive, precisely because the longer the global trade war drags on, the stronger gold will become. Rising inflation will further complicate the economic difficulties of the G-20 in Argentina, even as China haggles with the EU. And if trade tensions turn into actual geopolitical tensions — the U.S. and China threatening war — gold’s relative safety and security, which may be finally gaining enough global traction to give it a substantial boost, will be all the more attractive.

I don’t know how that will ultimately play out. I do know that it’s far preferable to owning gold than selling it, and I think the news this week of $2 billion in new investment in gold at $1,700 a troy ounce, something entirely new, is further evidence that investors see gold as a relatively safe asset in more ways than one.

Paul Krugman is a Nobel laureate in economics. He is a New York Times columnist. His new book, The Sinking of the Titanic: The Battle to Save the World Economy From Collapse, won the 2017 Samuel Johnson Prize for nonfiction. He is the author of The End of Poverty: How Individuals Can Live More Fully and Why We’re Failing to Do It. This post was originally published in the Financial Times.