“MalCORP” – (Company in the story) 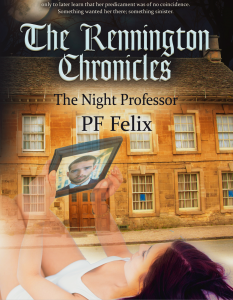 The Nigh Professor [Book Cover]

I am WOMAN!!! Defy ignorance; respect the ‘WHO’!

If you’re an 80’s horror fan; I mean everything from ‘Fright Night’ to ‘Q’; then RC-The Night Professor will keep you satisfied. Peril & Death, in Armani Best!

My true desire is to write stories that do more than just entertain. They reflect…”
— P.F. Felix

SAN FRANCISCO, CALIFORNIA, UNITED STATES, July 6, 2021 /EINPresswire.com/ — PF Felix, an author with an eye for paranormal masterpieces, enthusiastically presents the release of book one of her paranormal stories titled, THE RENNINGTON CHRONICLES: (Book 1: The Night Professor). This book was 1st released on Amazon and Booklocker.com, in mid-May and is now being sold on several prominent virtual bookstores (i. e. AbeBooks, Alibris, Books-A-Million (BAM), Barnes&Nobles (B&N), eBay, Target, Walmart, and much more…), as noted on her website bookstore page.
The Night Professor (a.k.a. TNP) is a novel about a (fictitious) town called Rennington that was devastated earlier that spring due to an unexplained explosion. During the course of the town’s reconstruction, a lucrative development & restorative firm called ‘MalCORP’ surfaced to provide aid and rebuild the town, almost singlehandedly. Yet, unbeknownst to everyone, Rennington was cursed. Meanwhile, a young, beautiful West Coast law student named Amyra-Rose Moore, convicted for the accidental death of her biracial girlfriend, was sentenced to [hard] labor in the bleak New England backwater of, Rennington for the duration of her punishment. However, as destiny would have it, her grim predicament prior to and during her time at Rennington was all contrived by something sinister; something dark. The darkness wanted her there. It was always waiting for her; never relenting; NEVER!
TNP is the debut of THE RENNINGTON CHRONICLES series with additional works underway to complete the decadent saga surrounding this murky metropolis. “When creating this particular story, I put my fingers through carpal tunnel-hell, as I couldn’t stop writing. I wouldn’t… I was compelled to continue. It was an utterly sweet obsession that I wouldn’t give up”. Said PF, Author at PfFelix.com. This novel is saturated with poignant drama, gut-wrenching humor, action-worthy suspense, romantic situations, deception, and (well) paranormal-thrillers. PF is excited to officially announce the release of this work, as it took nearly half a decade to construct. As listed on her website, “I love drawing excerpts from real-life events, arcane folklore, and religious tragedies as inspirations to weld into my work. Getting up close and personal with mischief is dire, and I want these chronicles to feel relative and … I believe people need to see their true selves via a ‘sincere lens’, not BLACK MIRRORS. A lens that only an author can render”…

[STORY’S EXCERPTS]: Customers have already positively reacted after reading this book. Below are some noteworthy excerpts from the story that have left many on edge, nail-biting:

– [Chp. 1 – pg. 11]: As many rushed to find shelter, the sight of the unaccounted-for weather seemed biblically foreshadowing. “It’s the middle of God-damn spring. What the hell could this mean?”, one of the frightened townswomen lamented. “Can’t you see Jacqueline? It’s a sign!”, her friend warned. “We’re in deep shit.”

– [Chp. 1 – pg. 16]: Although there was no evidence or murder weapon to tie Amyra to his daughter’s death, he was going to see for sure that the Moore’s paid dearly for everything that had happened to the Blacque family over the years.

– [Chp. 1 – pg. 17]: Now that the media was on his side, he used this platform to spark a nationwide frenzy of the hypocrisy of ‘minority justice’ regarding his daughter Em, stating, “if she were white, this would have already been resolved… His sights were fixed on Amyra, accused of purposely not acting promptly, causing the death of his only daughter, … to the good-reverend, Amyra was the answer to two problems: her mother’s past sins and his daughter’s precious little tongue.

– [Chp. 5 – pg. 97-8]: Then all of a sudden, she felt a flash of light spring before her sealed eyes. Water was gushing out of chlorine-filled lungs, giving her a sting-like burn all through her chest. She suddenly was shivering uncontrollably, faintly hearing someone call out to her. Myra felt a steep chill consume her flesh as the walls of death started to recede… In a concerned tone, an ominous voice droned, “She’s alive.” …
“I’ve got you!” Myra heard someone say in her ear. As she opened her eyes, it was Malik. She couldn’t speak, but he held her close. “I got you,” he said again.