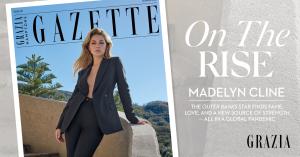 The Grazia Gazette: Hamptons will published six times this summer and be distributed in the New York’s East End and select locations through-out New York City.

—THE ‘OUTER BANKS’ ACTRESS WEARS SALVATORE FERRAGAMO FOR THE FIRST-EVER ISSUE OF GRAZIA GAZETTE: THE HAMPTONS—

The expectation to share everything is intimidating. It’s a constant pressure that takes real thoughtfulness to navigate.
”
— Outer Banks star Madelyn Cline

MONTAUK, NEW YORK, USA, May 29, 2021 /EINPresswire.com/ — Pantheon Media Group is proud to present the first-ever cover feature of Grazia Gazette: The Hamptons, a limited-edition iteration of GRAZIA USA targeted to and created for the most influential in America’s summer playground, featuring Outer Banks star Madelyn Cline in Salvatore Ferragamo.

In her first high-fashion cover feature, Cline, 23, wore a series of looks exclusively from Ferragamo’s 2021 pre-fall collection. In the cover interview by contributor Aaron Rasmussen, Cline speaks for the very first time about the experience of becoming famous – and finding love on set – in the middle of a pandemic.

Cline describes the tight-knit nature of the Netflix series’ set, and how the cast members continue to keep each other grounded in the whirlwind of Hollywood.

“The first season of the show felt like going and shooting an indie,” Cline says. “It was very tight-knit, so the filming of the first season felt very intimate in the best way possible. We really vibe with our crew and our cast, obviously. We immediately had chemistry, and we immediately started hanging out, which is amazing.”

“We all kind of started in the same place when we got the show,” she explains, “and we just stuck together. We’re all going through the same thing and it just helps to have people around you who understand and who are there for you. We keep each other grounded and we hype each other up. We’re all each other’s best hype man.”

Although she worked as a child model for years, Cline says that the experience of fame in the 21st century – and the social media component that comes along with it – has been challenging.

“I’m still learning,” Cline admits. When it comes to engaging with fans in a healthy way. “It’s new territory for me.”

“The expectation to share everything is intimidating,” she continues. It’s a constant pressure that takes real thoughtfulness to navigate.”

Still, Cline is focused on being a star with staying power, in the model of ingenues-turned-A-listers like her role model, Scarlett Johansson. For her, staying grounded as a millennial mega-star requires a regimen of meditation, journaling, workouts, and other means of self-care.

“I’ve met a lot of women in my time here in LA – really independent, powerful women – and I admire that. Bottom line, just being able to be around that kind of energy and women who are such bosses is incredible,” she says.

Read the full feature on GraziaMagazine.com, or pick up the inaugural issue of Grazia Gazette: The Hamptons at Zero Bond, Soho House, and other exclusive locations in NYC and the Hamptons over Memorial Day weekend.

ABOUT GRAZIA:
Grazia is Italy’s fashion bible, published by the Mondadori Group. For 80 years Grazia has remained in step with changing tastes season after season, style after style. At the top end of quality and design, Grazia is the most accomplished ambassador of the “Made in Italy” brand and is a preferred advertising vehicle for designer, fashion, and beauty companies. Thanks to its experience, excellence, and brand value, Grazia is the first Italian weekly magazine to extend its successful formula abroad with 21 editions worldwide in 23 countries, creating the most dynamic magazine network on the market and the global platform graziamagazine.com.

ABOUT PANTHEON MEDIA GROUP, LLC:
Pantheon Media Group (PMG) is an independent next-generation media company that brings one of the most prestigious European fashion magazines to the biggest fashion market in the world. PMG is the exclusive publisher of Grazia USA, the latest franchise of the iconic fashion bible, first launched in Italy in 1938. Also uniquely focused on beauty, culture, society, status, celebrity, and luxury, Grazia USA publishes digitally first and later in print, with the release of the first of its quarterly 400-page magazines in 2021. Grazia USA does more than just inform and inspire an educated audience of influential readers: It is unlike anything the fashion industry in the United States has ever seen. We do not serve readers, we serve users. PMG is a 360-degree media business that is poised for the future, broadening storytelling into virtual and augmented reality, video, television, audio, e-commerce, live events, branded content, innovative advertising solutions and beyond. PMG is headquartered in New York City.