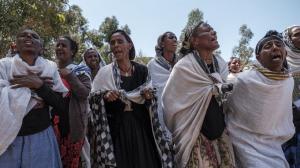 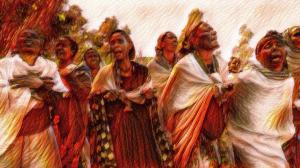 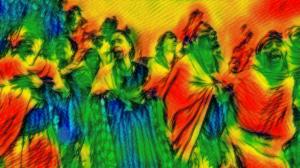 MEKELLE, TIGRAY, ETHIOPIA, July 8, 2021 /EINPresswire.com/ — As the war-torn Tigray Region in northern Ethiopia continues to experience extreme food shortages (1.8 million on
the verge of famine, according to UNICEF; 400,000 already there) one group is using a relatively new way to support aid efforts: NFTs. According
to Mirna Saraswati of SaveTigray, “Last year we planned to create NFTs from Fair Trade Art created by women from Tigray. But the advent of the war in
November put an end to those plans. So instead, we are making NFTs based on interpreted photos of the tragedy. We will sell them on our NFT marketplace, and donate the proceeds equally to four groups: the World Food Program, International Rescue Committee, UNICEF, and Save the Children.” An example can be seen on their website, savetigray.net

Using NFTs to support charities is something that has never been done before. The group hopes to use the Tigray project as a prototype, so that
they can later create similar projects to address Climate Change and other issues. “We believe that NFTs are here to stay” says the group’s COO
Savannah Partridge. “We’ve solved the biggest problem associated with them, which is energy usage. Our platform uses 10 million times less energy
than the standard Etherium-based ones. Like any NFT, the provenance of each work can be easily traced through the Blockchain. And buyers can
continue to use each image to raise more for the cause, if they so choose.”

SaveTigray also plans a publicity drive to make the public aware of the Famine and quasi-Genocide in Tigray. “Most people in the West, including
celebrities who usually rally round for a tragedy this big, are not involved” says Partridge. “As much as we want to raise funds for victims,
we really want to spread the news to millions. The Ethiopian government has announced that aid flights can resume from the capital, but so far
none have been given approval. An outcry from the public can compel them to act.”

To volunteer write to help@savetigray.net.

To bid on an NFT write to savannahpartridge@gmail.com

Evidence of Massacre in Tigray