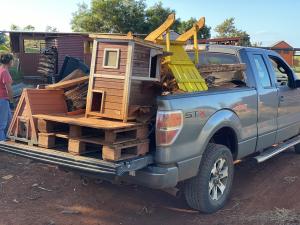 Truck that was stolen 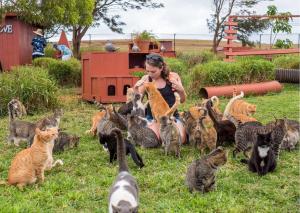 Lanai Cat Sanctuary, Hawaii’s largest animal sanctuary, announced that they have launched a fundraiser to replace a stolen work truck, the only one they have.

Our hearts sank when we heard the news that our truck was stolen from Honolulu Ford; this was an unexpected expense during these already trying times,”
— Keoni Vaughn

Lanai Cat Sanctuary (LCS), Hawaii’s largest animal sanctuary, announced that they have launched a fundraiser to replace a stolen work truck, the only one they have.

The island of Lanai in Hawaii is home to one of the most isolated animal sanctuaries in the U.S. with 3,000 residents, one gas station and no traffic lights. Part of the hardships of living on such a small island is that vehicle repairs and regular maintenance are limited. LCS only has one vehicle which helps them from getting to and from the port to receive weekly food and supplies to care for 650 cats, as well as transporting cats for adoption.

In January 2021, LCS shipped its 2013 Ford F150 4×4 to Oahu for repairs and servicing. Once it arrived, it was taken to Honolulu Ford. A few days later, Lanai Cat Sanctuary received a call with news that the service center had left the keys in the ignition. As a result, the truck was stolen in less than 30 seconds since they had also left the entry gate wide open.

The dealership had initially advised LCS to handle this issue through its own insurance but LCS implored the service center and dealership to file a claim through its insurance. They did so and Honolulu Ford’s insurance company credited LCS $22,102 for the stolen truck. However, the dealership’s only available, comparable 2020 truck would require an additional $23,000. Cries for help to the general manager were not responded to and phone calls were left unreturned. The only consolation LCS received was a $3,500 discount for their “inconvenience.”

Apparently, LCS is not the first customer to have issues with the Honolulu Ford-Lithia Motors dealership. After this incident, LCS discovered that the Better Business Bureau had placed an alert on this dealership since they have had 25 complaints in the last year.

“Our hearts sank when we heard the news that our truck was stolen from Honolulu Ford; this was an unexpected expense during these already trying times,” said Keoni Vaughn, Lanai Cat Sanctuary Executive Director. The nonprofit sanctuary’s only option was to pull funds from emergency reserves to cover the costs. The good news is that two months later the replacement truck is now on Lanai and has already been used to pick up shipments of food and supplies.

To make a donation to the fund for Lanai Cat Sanctuary’s stolen truck or for more information on their nonprofit, visit https://bit.ly/2TfEmxs.

About Lanai Cat Sanctuary. Lanai Cat Sanctuary (LCS) is a nonprofit that cares for more than 650 cats that were rescued from the streets and remote areas of Lanai island in Hawaii. LCS also protects the island’s native bird population by removing feral cats from nesting grounds and relocating them to the sanctuary where all the cats are welcomed to stay there for life or until they find a home.

With a staff of 11, LCS maintains a 3.5-acre enclosed and open-air sanctuary. It offers life-long, high quality care and special housing for elderly and sick cats, a nursery and more. Veterinary teams are brought in weekly to ensure the best medical care possible. All cats are sterilized and every cat has a name and a care plan. The Sanctuary welcomes 15,000 visitors annually from all over the world and is the number one attraction on the island.