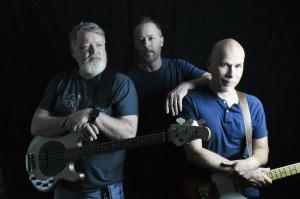 The songs of The Mood Kings contain reserves of depth and dark wonder. The more you’re exposed to their repertoire, the deeper that mystery gets.

CHARLOTTE, NC, USA, July 6, 2021 /EINPresswire.com/ — A band plays in a cabin in the deep woods. The ceilings are low and the light is filtered, but the musicians look comfortable, rooted, and absolutely at home. The music they play shares many qualities with the cabin: it’s classic, thoroughly organic, proudly old-fashioned, starkly gorgeous, and pleasantly rough around the edges. The Mood Kings are the band, and if the walls of that cabin in the woods could sing, “Dust And Bone” would be their song.

That handsome little house amid the dense North Carolina forest is one of the stars of Tony Murnahan’s crisply-shot clip for “Dust And Bone,” the uncompromising new single from The Mood Kings. And just as there’s much more to that cabin in the woods than it initially seems, the songs of The Mood Kings contain reserves of depth and dark wonder. The more you’re exposed to the Charlotte rock trio’s repertoire, the deeper that mystery gets. It’s in the near-telepathic connection between guitarist/singer Herman Ospina, bassist Joey Townsend, and drummer Mark Schwarze, and in Townsend’s powerful backing vocals, which add a dimension of dialogue to songs that are already fiercely communicative. It’s in the group’s sense of melody, which is simultaneously familiar and novel, and their approach to small-combo arrangement, in which every detail and every instrument sound is carefully considered. It’s in the haunting sound of The Wonder Of It All, the band’s 2018 debut full-length, and the many singles that have followed. Most of all, it’s in The Mood Kings’ lyrics, which, without ever being too overt about it, are emotionally evocative and effortlessly poetic. “Dust And Bone” is a dark riddle: an epistle from the other side, a message between lovers, a whisper on the wind through the branches.

The main character of the “Dust And Bone” video carries those lyrics on a letter — half of it, anyway. It’s been ripped in two, and she stumbles through the forest in search of the rest of the torn page. Once she finds the cabin, it’s a sure bet she’ll be climbing inside. But what she discovers inside those narrow rooms of the house defies easy description, and her quest to solve the puzzle is not without its own cost. Tony Murnahan is an experienced hand at generating mystery — many of his videos are chronicles of journeys to exotic places — and here, he balances tension, beauty, and indeterminacy to tell the story of lovers divided but not entirely broken.