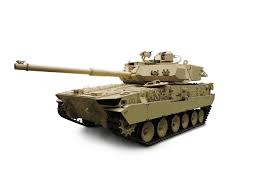 Contrary to how Patton had seen tanks as the new cavalry, the Army instead focused on linking them to the infantry. With funding for new tanks drying up, Patton transferred back to the cavalry in despair, while Eisenhower took a staff job a year later.

In the 1950s and 60s, British military engineers were actively developing new modifications of light tanks. Projects of that time could be considered outstanding.

Few recognised during World War I that the means for returning mobility and shock action to combat was already present in a device destined to revolutionise warfare on the ground and in the air. This was the internal combustion engine, which had made possible the development of the tank and eventually would lead to the mechanised forces that were to assume the old roles of horse cavalry and to loosen the grip of the machine.

As the French Army was moving forward in the area of mechanization, doctrinal strife began to develop. In 1934, Lieutenant Colonel Charles de Gaulle published Towards the Professional Army (Vers l’Armée de Métier). De Gaulle favoured a professional mechanised force, capable of executing both the breakthrough and the exploitation phase. He envisioned a pure armour brigade operating in linear formation.