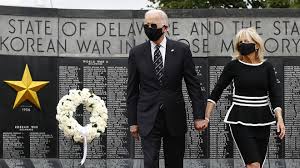 It was Veterans Day in my hometown of Scranton, PA. There’s something great about watching the veterans of the past and the men and women of the present together sharing the same space, physically and emotionally.

Before I head to work, I always walk to the Scranton Veterans Memorial — the same space that was once the site of the Civil War-era Battle of the Shickshinny battlefield.

The ceremony begins at 10 a.m. sharp — another way to celebrate the millions of Americans who enlisted to serve our country. The rally calls to salute fallen veterans, including those who were killed in action and those who made the ultimate sacrifice in the line of duty. The field of 31 granite memorials features plaques identifying those who were killed.

Like so many others, I wanted to take a minute to stand among the a dozen or so veterans I met in formation on the battlefield. This year, I stood near a Korean War veteran who was striking from a minor injury. This veteran — a Vietnam vet of almost 50 years — laid a wreath and said a few words. He was gracious and had an authentic American twang.

The other veterans — his daughter and grandson — were waiting behind him. They simply walked up to the speaker’s platform. When it was his turn, he honored the fallen soldiers of the past, often quoting some of their most famous quotations.

He talked about paying for school with GI bills and the good times he shared with his grandfather who used the bill to pay for college. He talked about his fellow veterans who didn’t make it back from the battlefield.

“Never forget,” he said, with his son by his side.

As the speaker concluded, I walked over to my friend, Pat King, who was standing alongside me and who I was planning to meet later that day. Pat was a Marine who served in the North Arabian Sea during the Vietnam War. After his tour, he returned to the U.S. and became an engineer with Halliburton — a company I frequently see when I visit the Scranton Patriot.

I told Pat how much I admired what he did and that he was an amazing man. He also told me how grateful he was for the support he received from my wife and I.

With a heavy heart, I told Pat I would not see him until after work on Friday, but that he was certainly someone I appreciated.

After the ceremony, I immediately headed up to the Draft Board Museum. We usually travel from the old Rock City diner to the museum. This year, we headed to a new location at 124 E. Lincoln Ave. I do not know if it was because of the new location or because the downtown area was congested.

We both knew the Academy Hill Steps where the original Rock City once stood. For every step we took up the hill to check out the past, another one took us to the future. A sculpture shows a soldier kneeling with folded combat boots on his foot. The city has been erased from the hill, and for a few moments, I realized my city lay dormant and forgotten.

As I walked up the steps, I saw one of the infamous “kissing goats” that tell the story of the original Rock City. They sat at a nearby concrete bench as if waiting to eat.

On a more somber note, the museum is hosting a Musket Collectors’ Show from 11 a.m. to 4 p.m. on Sunday. I bought a double-Dutch jump roping set for the three people who gathered to buy it with our token 10.

On Monday, we hit the Appleton Water & Ice Company in Willow Street Mall to purchase a seltzer bottle for Pat and for myself and my husband, who would have used our spare change to buy one, for their wedding anniversary.

From time to time, I don’t know if the men and women on stage with me are reading the video script or if they’re just being themselves. But this Veteran’s Day, I feel great to be out here, in Shickshinny, doing my part to make sure our veterans are remembered and honored every day.