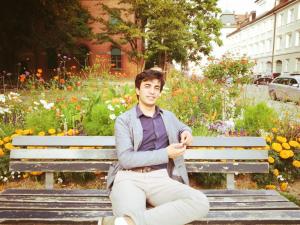 Cultural diversity enhances the potential of our collaboration!

GERMANY, June 1, 2021 /EINPresswire.com/ — Trainers for intercultural competence are not rare, but still in demand. It is the nuances of a language that are learned in personal exchanges, says Sayed Sayedy. He has been coaching for 10 years with a focus on understanding and effective problem solving in an intercultural context. Sayed Sayedy was born *1992 in Parwan, Afghanistan where he studied sociology and social work. During his school years and studies, he was already active as a consultant and activist for youth empowerment and worked as a trainer for the “Institut für internationale Zusammenarbeit des Deutschen Volkshochschul-Verbandes” until 2013. From 2001 to 2014, he worked as a translator and intercultural mediator for the international NATO security force ISAF. Even as a schoolboy he was enthusiastic about languages and Interculturality, which is a rarity.

He is currently studying “Training and Development” at the University of Salzburg and works freelance as a coach, mediator, trainer in an intercultural context. This includes classic intercultural competence as well as communication training, conflict management, diversity management and coaching.

Which target groups do you focus on?

They are very different groups that a globalized world brings with it. English is spoken in many companies and institutes, products are sold worldwide, international congresses are attended, research stays are planned. German native speakers want to deepen their foreign language skills, immigrants and visiting scientists want to learn German in order to integrate better outside of work. It is important to be aware of intercultural differences, he said. This applies to people who lead international teams as well as to salespeople who have customers in different countries, says Sayed Sayedy.

Would you like to say anything more specific about intercultural competence?

So intercultural competence means not only sensitivity to other cultures, but also recognizing so-called “blind spots,” things that we take for granted, that we don’t question, but that others in an intercultural environment don’t take for granted, but are sometimes unfamiliar or incomprehensible. Employees who have intercultural competence are very valuable to a company because they not only bring empathy and attentiveness to dealing with colleagues from other countries, but also consciously perceive numerous aspects in company processes and explain them to their colleagues or inform them about them. They are able to look beyond their own horizons and see through the eyes of others – a precious skill.

This video shows diverse daily situations among a circle of friends, thereby it often comes to misunderstandings.