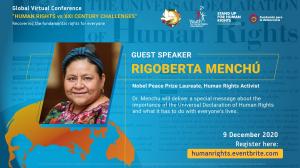 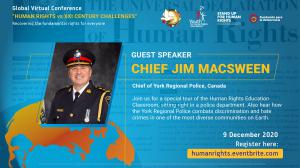 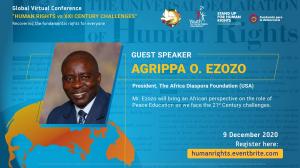 The forum featured Ms. Rigoberta Menchú, Nobel Peace Prize Laureate for 1992. The Guatemala native was awarded for her work to secure the rights of indigenous people. In 1996, Menchú, a UN Ambassador for the world’s indigenous peoples, was instrumental in brokering peace between the government and guerrilla organizations.

“Making people aware of their human rights instills in them the ability to use their rights, to defend their rights and allows them to live their fundamental freedoms,” she said. “Human rights awareness is the only way to ensure that citizens are free and that their rights are respected.”

The event also included presentations by:

* Chief Jim MacSween, Chief of York Regional Police, whose city is the most diverse in Canada’s multicultural tapestry. He presented a video of the county’s unique Human Rights Education classroom.

*Laura Guercio, President of Legal Aid Worldwide, who spoke of the importance of the International Justice System in creating peace and building respect for human rights.

*Agrippa O. Ezozo, President of the Africa Diaspora Foundation (USA), who spoke of human rights education as the key to the devastating social and political problems on the African continent.

*Katsuya Kodama, President of the International Organization for the Promotion of Social Contribution (Japan). The son of a survivor of Hiroshima, Mr. Kodama believes a “human chain reaction” is the answer to “atomic chain reaction.”

The event was hosted by Wil Seabrook, musician and founder of Rock for Human Rights, who also moderated the question-and-answer period at the end of the presentations. The entire event may be viewed on United for Human Rights’ Facebook.