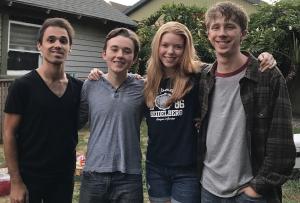 LOS ANGELES, CALIFORNIA, UNITED STATES, February 17, 2021 /EINPresswire.com/ — PHOBIAS is an anthology horror movie that explores the deep fears of five dangerous patients, suffering from extreme phobias at a government testing facility. They are put to the ultimate test under the supervision of a crazed doctor and his quest to weaponize fear.

On January 27, 2021, Vertical Entertainment officially acquired North American distribution rights to Phobias, which was first screened at Mammoth Film Festival in February 2020. Phobias. Eric B. Fleischman of Defiant Studios and Maurice Fadida of Kodiak Pictures produced the film along with director Varley. Directors are Joe Sill (Strays), Chris von Hoffmann (Monster Party), and three first-timers, Maritte Lee Go, Jess Varley, and Camilla Belle, star of the When a Stranger Calls remake. Producers include Radio Silence, makers of 2019’s Ready or Not and the upcoming Scream 5.

Phobias features five distinct stories about fear. Joey Luthman is teenager: “Grady” in the segment: EPHEBIPHOBIA, written & directed by Chris von Hoffmann. (Ephebiphobia is the fear of youth or teenagers). Luthman’s scenes with talented actress, Lauren Miller Rogen (“For A Good Time, Call…”) are very dramatic and involved detailed stunt work, carefully coordinated by Chris von Hoffman. His siblings include Mackenzie Brooke Smith as “Blaire” and Benjamin Stockham as “Isaac”.
The character “Grady” is the oldest of three siblings – sister “Blaire” and younger brother “Isaac”. Blaire is the ring leader of the group and Grady follow what she says. They decide to take action against someone and horror ensues. Grady is all for violence, but isn’t the smartest person around. Things quickly get out of hand and Grady gets more than he signed up for.

When asked about the filming, Luthman discusses some of the experience.
“There were several stunt shots where I needed to be very violent with another actor. We ran through the stunts with a stunt coordinator and it was definitely an intense process. Everyone was on their A-game and commited to making every stunt look realistic, while being safe. Chris was very specific about what he wanted and we did lots of rehearsing to get it just right. During filming he worked closely with all the actors to perfect our performances. It was great to work with such talent and expertise.”

Joey Luthman has spent most of his life in front of the camera. As one of a large family of thespians, in Dayton Ohio, Joey learned his passion for acting at a young age. At just five years old, Joey booked his first professional role at The Dayton Playhouse (where Rob Lowe also began) in a production of “Nuncrackers” singing “I’m a Little Teacup”. He performed in many theatrical productions at LaComedia Dinner Theater, Muse Machine and Milford Theatre Guilde in Ohio with Broadway casts from age 5-9. At 9 he was discovered at a National Talent Show in Florida and was soon performing as one of five national triple threat finalists on The Tyra Banks Show in Hollywood. Today he is also behind the camera as an active producer, writer, director and cinematographer. He has several films in production at this time.

Joey is known for his iconic roles such as “Rad Ferris” on Weeds, “Young Luke Spencer” on General Hospital and “SPC Jonathan Riddell” on FOX / National Geographic Series: The Long Road Home.

He recently guest starred on Chicago Med, Speechless, Alexa & Katie and Hawaii Five-0. Many remember his recurring roles as “Roger McFadden” on The Goldbergs and “Teen Zoltan” on Disney’s A.N.T. Farm and “Stuart” on Instant Mom, “Drew” in Modern Family, “Evan” on Private Practice, “Dave” on Nickelodeon’s iCarly, “Emmitt” on Disney’s Kickin’ It, “Craig Kronberg” on How to Rock and “King Orr” recurring on Chosen Season 2.

With almost 100 credits on IMDb, a few of his memorable movie roles include “Teddy Toblosky” in 10.0 Earthquake with Henry Ian Cusick, “Isaac” in Monsters with Ion Skye, “Young Eli” in Forget Me Not with Bella Thorne & Cody Linley, “Zachary” in Finders Keepers with Tobin Bell & Jaime Pressly, “Lysander” in Opening Night with Anthony Rapp and An American Carol, directed by David Zucker.

This is an excerpt from a recent article by Jason Price in Icon vs Icon:
“Voted one of Hollywood’s Top 25 young actors to watch according to IMDB, Luthman has already had a storied career at the young age of 24, with guest starring & recurring roles on TV’s biggest dramas including ‘Hawaii Five-O,’ ‘Chicago Med,’ ‘Grey’s Anatomy,’ ‘Criminal Minds,’ ‘Ghost Whisperer’ and ‘Private Practice.’ Over the years, as his skill set has grown, so have the amount of challenging new endeavors he has taken on. Nat Geo’s ‘The Long Road Home,’ is no exception to the rule. as well. Luthman stars as SPC Jonathan Riddell, opposite Michael Kelly (‘House of Cards’), Jason Ritter (‘Parenthood’), Jeremy Sisto (‘Six Feet Under’) and Noel Fisher (‘Shameless’) The Long Road Home was rated one of the Top new War Series of 2019.”