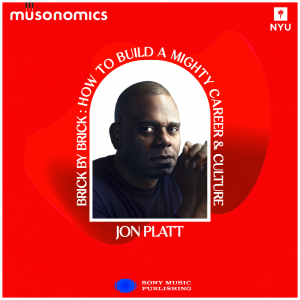 NEW YORK, NY, UNITED STATES, July 13, 2021 /EINPresswire.com/ — Today, the Musonomics Podcast, produced in partnership with Musonomics LLC and NYU Steinhardt, released its 36th episode featuring an exclusive interview with music executive and industry icon Jon Platt, Chairman and CEO of Sony Music Publishing. Recorded during NYU Steinhardt’s live virtual alumni event earlier this spring, Platt spoke to Musonomics host Larry Miller, Chairman of the school’s Music Business Program, on topics such as his early days in the music industry, how diversity and inclusion is a source of competitive advantage, and the most pressing issues facing the future of music publishing.

“I’ve been fortunate to know Big Jon Platt since his days at EMI in the 1990s. However, hearing about his early days as a DJ in Denver and the roles mentors like Chuck D and Jody Gershon played in his life, I was able to understand more about how he developed his ideas about creating change, or ‘leaning into discomfort’,” said Miller. “Our conversation was truly inspiring, and I’m glad we can share his insights with the wider Musonomics audience.”

Since his appointment to lead the world’s largest music publisher in April 2019, Platt’s inclusive leadership style has reshaped the corporate culture and created a powerful example for the music industry. Under Platt’s leadership, Sony Music Publishing has significantly increased representation by women on the company’s senior leadership team. He has also attracted key new signings and executive talent, as well as expanded opportunities available to songwriters. With a mantra to always put songwriters first, the company has set the standard on how songwriters are paid and was the first music publisher to expedite foreign royalty payments.

Culturally, Platt is acknowledged for his influence as a creative executive. He is widely credited for bringing hip-hop music to dominance in the music publishing industry by elevating how R&B/hip-hop artists are respected and compensated as songwriters. Throughout his career, he has signed and collaborated with prominent songwriters including Jay-Z, Beyoncé, Kanye West, Pharrell Williams, Rihanna and Usher.

During the course of the episode, Platt also shares his thoughts on how the COVID-19 pandemic has impacted Sony Music Publishing’s business model, the current state of music catalog acquisitions, and the opportunities surrounding emerging markets like India and Asia.

To listen to any episode the Musonomics Podcast, visit Apple Podcasts, Spotify, or SoundCloud. This episode was produced with students from the NYU Steinhardt Music Business graduate program: technical support from Nakul Sharma, editorial direction by Jorri Roberts and Clayton Durant, with additional support from Ankit Chugh, Ryan Wincig, and Mari Barbieri. Recent episodes of Musonomics include a profile of Hipgnosis featuring CEO Merck Mercuriadis along with pop songwriter/producer Tricky Stewart and his brother and business partner Mark Stewart; the evolution of video games and music with Jon Vlassopulos, the Global Head of Music at gaming platform Roblox; and an exploration of issues around music licensing for podcasts with music clearance expert Deborah Mannis-Gardner, music supervisor Scott Velasquez of Frisson Sync; and Premier Music founder and Downtown Music Records Chairman Josh Deutsch.

About Musonomics:
Musonomics LLC provides strategy consulting and analytics for and about the music industry. It was founded by long-time music and technology entrepreneur and business advisor Larry Miller. He is also Clinical Associate Professor at NYU-Steinhardt Department of Music & Performing Arts Professions, and Director of the Music Business Program. He began producing and hosting the Musonomics Podcast in 2015 in collaboration with NYU, giving students the opportunity to assist in all aspects of bringing the episodes from concept to distribution.

Transcript of Musonomics episodes available to media on request.